Bridget A. B. Halfaker

Felt pen tattoos, unicorn cat costumes, fog hearts on the shower door, and a 'c' button on the keyboard that doesn't like to be pushed. These are a few things in Bridget Halfaker's life. Mother to an almost 8 year old boy, she spends much of her time throwing wiffle balls onto the roof and watching them roll back down. A special education teacher by day, she is kept constantly on her toes. As of today she has completed 5% of her goal to visit every country in the world. The one thing Halfaker would love to do before she dies is be a foley artist for an indie film.

What are you working on next?
I am currently working on a Christmas story inspired by true events that happened to me. The story follows Christine Frost, a joyful, carefree photographer, who is struck down by a car on Christmas Eve. She is thrust into a world of anger, fear, and loneliness; memory loss and a body that won't work as well anymore don't help the situation any. While she searches for love and acceptance from others, she ends up opening her heart to a teenage boy who is suffering his own losses. They help each other become better, happier people, and Christine discovers the power of community.
Who are your favorite authors?
Lois Lowry's "The Giver" (I'm disappointed that they made it into a movie, although my office mate loves the movie), Sir Philip Pullman's "His Dark Materials", but mainly just the first two and 2/3 of the series (VERY happy with the movie of the first book- "The Golden Compass"), Lemony Snicket's "A Series of Unfortunate Events" (I could give or take the movie on this one, though I love Jim Carrey), Steven Moffat's "Blink" [Doctor Who: Season 3, Episode 10], Jane Austen's "Pride and Prejudice". I also really really love Teri Sloat's "Farmer Brown Shears His Sheep: A Yarn About Wool". Adorable sheep butts and a great rhythmic cadence.
Read more of this interview.

Where to find Bridget A. B. Halfaker online 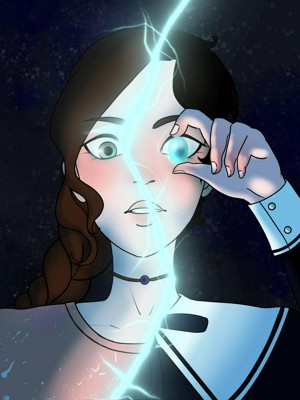 Shadow Blockers by Bridget A. B. Halfaker
Price: Free! Words: 71,520. Language: English. Published: September 3, 2022. Categories: Fiction » Fantasy » General
A self appointed mission to save her brother from the clutches of darkness finds Kylee, an ordinary girl with an unusual talent, traveling through one dimension to another. She encounters strange and fantastical demons as she attempts to pull together the pieces of his soul. Will her new found friends be able to help her on her mission? Or will her brother forever be lost to the Shadows?

Forged In Ice by Bridget A. B. Halfaker
Price: Free! Words: 85,530. Language: English. Published: March 29, 2020. Categories: Fiction » Fantasy » General
A lone forge on a moor. A youth who belongs neither to the humans who have raised him, nor the elves who claim him. Sebsatian must leave the comforts of the forge, embarking on a dangerous mission. Along the way he will meet many magical creatures who become new friends. With their help he can develop the skills necessary to accomplish his quest.

Bridget A. B. Halfaker's tag cloud

Bridget A. B. Halfaker's favorite authors on Smashwords

Anita D Russell
Latest book: Cultivating Change from the Inside Out: The Power of Being Human.
Published March 23, 2021.

You have subscribed to Smashwords Alerts new release notifications for Bridget A. B. Halfaker.

Would you like to favorite Bridget A. B. Halfaker?

You have been added to Bridget A. B. Halfaker's favorite list.

You can also sign-up to receive email notifications whenever Bridget A. B. Halfaker releases a new book.