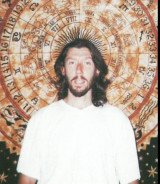 After his Dark Night of The Soul experience, and many, many 'light bulb' moments - he realised he was onto something but still didnt know as yet where it would all lead. So he asked The Universe "Show me in a way that I can impart this to others?" He then had life experiences he hadnt had before, and contemplated their meaning by the practice of asking and receiving. In 1996 he had the Theory of Everything revealed to him; in 1997, he met his essence twin; and in 2012 after an 18 day fast it was revealed to him who he was in a previous life. It was whilst living on The Mountain that he, quite literally, allowed the mystery of who we are, to be revealed to him ~ and now to us.

What are Brother David's professional / lifestyle credentials that make him particularly well suited to write 'All That Is'?
By middle-age, David had lost his career, a relationship, a house, a car, good health, good friends and even doubted his own sanity. Because he had worked to help other people, he didn't understand why his own life was a shambles when he thought he was being a "good" person, and so began asking, 'Why me?' In 1995, he experienced the Dark Night of the Soul and started having experiences which he hadn't had before. In 1996, the Theory of Everything was revealed to him. From 1997-2001, he camped in a tent & trailer (caravan) and by use of the 'Ask and receive' technique got answers in a series of a-ha moments (aka light bulb moments). During this time, he heard 'The Music of The Spheres', met his Essence Twin (aka twin flame) and was awoken by the brightness of the Morning Star. Not knowing where all of it was leading, he recorded the answers that came to him one by one - which have lead him to this Awareness.
What is the 'back story' that inspired Brother David to write this tome?
After David started having experiences and reflecting on or contemplating their meaning (not rationally deducing them), he realized that he was on to something B-I-G. Out of his passion, he started delivering classes to small groups of people and some of the participants asked him to write a book. He resisted their requests for many a year, until most recently, a student in a class expressed she would love to have a little book of David's sayings to carry around with her. In that instant David knew he was being called upon and so published this collection of insightful one-liners.
Read more of this interview. 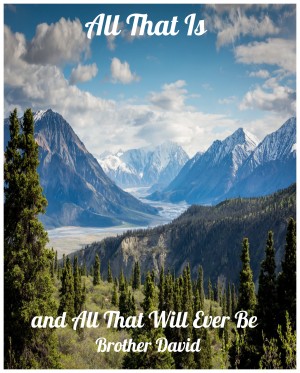 All That Is (and All That Will Ever Be) by Brother David
Price: $3.99 USD. Words: 4,060. Language: English. Published: October 15, 2016. Categories: Nonfiction » Inspiration » Spiritual inspiration
Bad things don't happen because we are bad - it's not like we're being punished. This book is for anyone who's ever asked Why me?, or ever found themselves wondering who we are?, why are we here?, and what are we meant to be doing?

You have subscribed to alerts for Brother David.

You have been added to Brother David's favorite list.

You can also sign-up to receive email notifications whenever Brother David releases a new book.