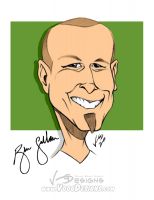 "Gotta Sing, Gotta Dance" are words from my favorite movie, Singin' In The Rain. The passion and excitement they evoke struck me to the core while I was taking a college film course taught by critic Manny Farber (author of the seminal book, "American Cinema."). Later, you could say I felt I "Gotta Write," but I'm getting ahead of myself.

A few years later, I was fortunate to get an internship with a television producer, while earning my M.B.A. from UCLA. What followed was an award-winning television executive and producing career. During those 25 years, I produced over 30 television movies, pilots, and series.

I produced my first television movie at age 24 and was a vice president at ABC by the time I was 29. If you care to learn more, you can see my credits and resume.

Along the way I was fortunate to work with such actors as Ingrid Bergman, Ron Howard (before he was a director), Mickey Rourke (THAT is a story), Don Johnson (another even better story), Ben Affleck, Hal Holbrook, Barbara Hershey, Sissy Spacek, Henry Winkler, Alan Arkin, and Brian Dennehey. I wrote articles for Daily Variety and the Producers Caucus Bulletin.

My article entitled "Murders of the Week," was a response to the then popular trend of taking just about every unsavory murder story and making it into a television movie. That article sparked a healthy debate and I like to believe helped usher out that low period in the history of television movies. (If you read that article, you'll see an embarrassing photo of me when I had a full beard -- another trend that has thankfully passed).

I became a first-time dad, to a son, four days after my 40th birthday, less than 9 months after getting married (we got pregnant on the honeymoon). My second son was born three years later. When my boys were still quite young, I left show biz to become a full-time dad and to care for my ailing parents, the classic "sandwich" situation.

Sadly, shortly thereafter, my marriage ended and my wife abandoned our children, leaving the state. I found myself a full-time single dad, in my late-forties. And after a while, I jumped into the new world of Internet dating. I was surprised to find that it was pretty much the only mode of dating that anyone was using.

I began writing various blogs on the dating sites I used, as well as articles for local publications, including a regular column for a local paper about being a single dad. Late in 2008, as my children were getting older and as both my aging parents had died, I began marketing my column to more newspapers and Web sites. The happy result, so far, is that I'm now published in over 75 newspapers and Web sites, internationally. And, more recently, I've begun a radio show based on my columns which you can read about in the "Radio Show" area here on my web-site.

My focus is primarily on parenting issues from the dad's point-of-view, though often the situations are gender-neutral. Yet, just as often they're not. It is my contention that the dad's point-of-view is less "heard" yet equally valuable to parents. My subject matter covers parenting situations I've experienced, but especially the ones that I believe are relevant to a great number of parents. That includes single parenting, divorce issues, dating as a single parent, step-parent issues, dealing with teens, drug and alcohol issues with teens, money issues, and sometimes just general issues about gender differences. I like to think I became a semi-expert on Internet Dating. And I suspect a compilation of all the blogs I wrote during that period will serve as the basis of my first book.

All these years later, I still feel passionate about everything I do. The "Gotta Write" drive allows me to express my many passions. I like to think I bring that spirit to everything I do, from heli-skiing and going on safari in Africa, to the everyday issues of raising two boys alone and then as a blended family. 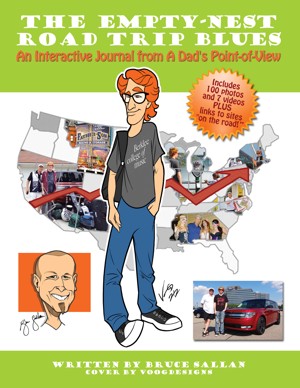 The Empty-Nest Road Trip Blues: An Interactive Journal from A Dad's Point-of-View by Bruce Sallan
Price: $2.99 USD. Words: 10,660. Language: English. Published: December 7, 2012. Categories: Nonfiction » Relationships & Family » Parenting / parent & adult child
In Bruce Sallan’s second book he documents his 3000-mile 8-day cross-country journey taking his eldest son to college, from Los Angeles to Boston. With over 100 photos, 7 never-seen-before videos, and live web links to places that they visited during the trip, this journal is designed to keep all readers interactive.

You have subscribed to alerts for Bruce Sallan.

You have been added to Bruce Sallan's favorite list.

You can also sign-up to receive email notifications whenever Bruce Sallan releases a new book.