Rosemary Morris was born in Sidcup Kent. As a child, her head was ‘always in a book.’ While working in a travel agency, Rosemary met her Hindu husband. He encouraged her to continue her education at Westminster College. In 1961 Rosemary and her husband, now a barrister, moved to his birthplace, Kenya, where she lived from 1961 until 1982. After an attempted coup d’état, she and four of her five children lived in an ashram in France.
Back in England, Rosemary wrote historical fiction and joined the Romantic Novelists’ Association, Historical Novel Society, Watford Writers and many online groups. To research, Rosemary reads non-fiction, visits museums and other places of historical interest. Her bookshelves are so crammed with historical non-fiction, that if she buys a new book she has to consider getting rid of one. Apart from writing, Rosemary enjoys time with her family, classical Indian literature, reading, vegetarian cooking, growing organic fruit, herbs and vegetables and creative crafts. 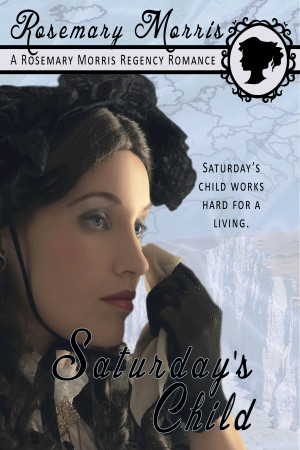 After the Battle of Waterloo, motherless ten-year-old Annie travels to London with her father, Private Johnson. Discharged from the army, instead of the hero’s welcome he deserves, his desperate attempts to make an honest living fail. Without food or shelter, death seems inevitable. Driven by desperation Johnson pleads for help from Georgiana Tarrant, his deceased colonel’s daughter. 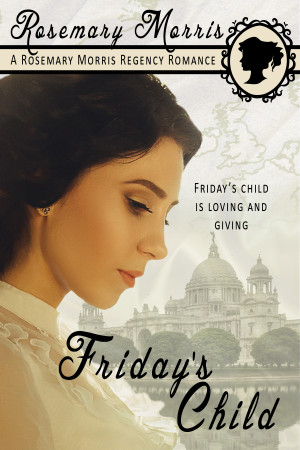 Since the day her oldest sister entered society, Lady Elizabeth, the Earl of Saunton’s sister, imagined the pleasures of her first London Season, during which she expected to meet her future husband. Unfortunately, when she is old enough to make her debut, no member of her immediate family is available to chaperone her in London, so she accepts her Great-Aunt Augusta’s offer to bring her out... 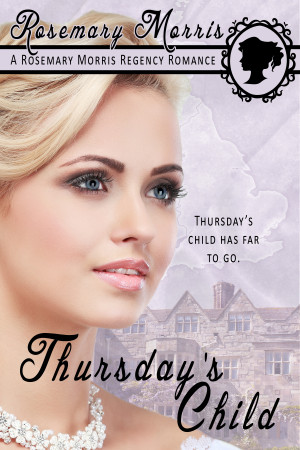 Thursday's Child by Rosemary Morris
Price: $2.99 $1.50 USD. (50% off until July 31!) Words: 78,530. Language: English. Published: July 1, 2018 by BWL Publishing Inc.. Categories: Fiction » Historical » Regency, Fiction » Romance » Regency
On their way to a ball, eighteen-year-old Lady Margaret is reminded by her affectionate brother, the Earl of Saunton, to consider her choice of words before she speaks. Despite his warning, she voices her controversial opinion to Lady Sefton, one of Almack’s lady patronesses, who can advance or ruin a debutante’s reputation. Horrified by her thoughtless indiscretion, Margaret runs ... 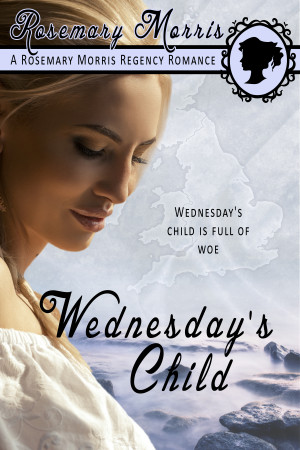 In 1816, Mrs Bettismore lies on her deathbed. Her twenty-year old granddaughter, Amelia is distraught by the imminent loss of her only relative, who has raised her in an atmosphere of seclusion and unyielding discipline. 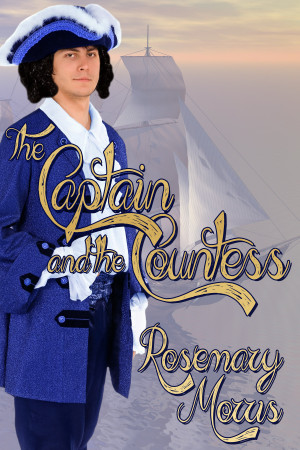 The Captain and the Countess by Rosemary Morris
Price: $2.99 $1.50 USD. (50% off until July 31!) Words: 84,280. Language: English. Published: July 7, 2017 by BWL Publishing Inc.. Categories: Fiction » Romance » Historical
Why does heart-rending pain lurk in the back of the wealthy Countess of Sinclair’s eyes? Captain Howard’s life changes forever from the moment he meets Kate, the intriguing Countess and resolves to banish her pain. Although the air sizzles when widowed Kate, victim of an abusive marriage meets Edward Howard, a captain in Queen Anne’s navy, she has no intention of ever marrying again. 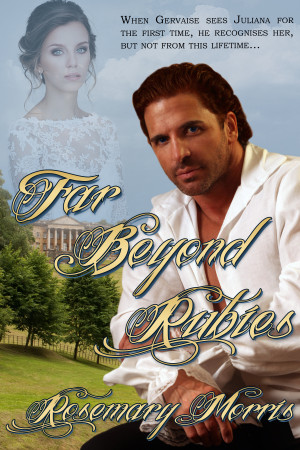 Far Beyond Rubies by Rosemary Morris
Price: $2.99 $1.50 USD. (50% off until July 31!) Words: 75,340. Language: English. Published: July 7, 2017 by BWL Publishing Inc.. Categories: Fiction » Romance » Historical, Fiction » Romance » Regency
Set in 1706 during Queen Anne Stuart’s reign, Far Beyond Rubies begins when William, Baron Kemp, Juliana’s half-brother claims she and her young sister, Henrietta, are bastards. Spirited Juliana is determined to prove the allegation is false, and that she is the rightful heiress to Riverside, a great estate. 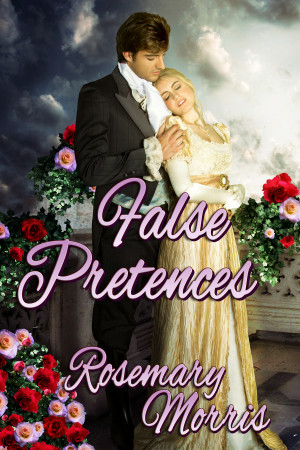 Five-year-old Annabelle, who does not know who her parents are, arrives at boarding school fluent in French and English. Separated from her nurse, with few memories of her past, a shadow blights Annabelle’s life. When high-spirited, eighteen-year old Annabelle, who is financially dependent on her unknown guardian, receives an order to marry a French baron more than twice her age, she refuses. 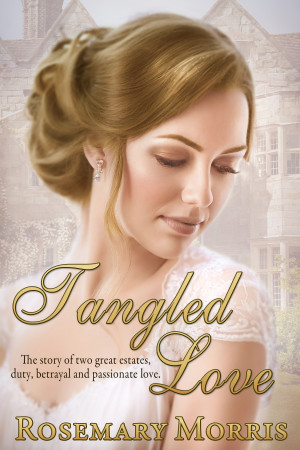 Tangled Love is the story of two great estates. The throne has been usurped by James II’s daughter and son-in-law, Mary and William of Orange. In 1693, loyal to his oath of allegiance, ten-year old Richelda’s father must follow James to France. Before her father leaves, he gives her a ruby ring she will treasure and wear on a chain round her neck. 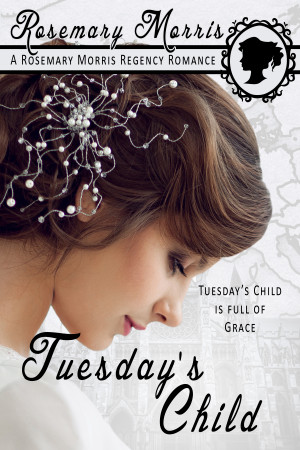 Tuesday's Child by Rosemary Morris
Price: $2.99 $1.50 USD. (50% off until July 31!) Words: 86,230. Language: English. Published: May 8, 2017 by BWL Publishing Inc.. Categories: Fiction » Romance » Regency, Fiction » Romance » Historical
Harriet Stanton followed the drum until the deaths of her husband and father, army officers in the war against Napoleon Bonaparte. Destitute, on the verge of starvation, she returns to England, with her three-year old son, Arthur. Although she has never met her father-in-law, the Earl of Pennington, with whom her late husband had cut all ties, for Arthur’s sake, Harriet decides to ask Pennington.. 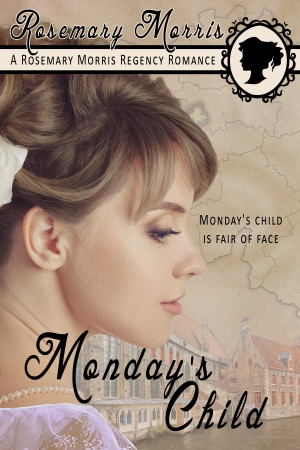 Monday's Child by Rosemary Morris
Price: $2.99 $1.50 USD. (50% off until July 31!) Words: 97,140. Language: English. Published: May 8, 2017 by BWL Publishing Inc.. Categories: Fiction » Romance » Regency, Fiction » Historical » Regency
n March 1815, Napoleon Bonaparte escaped from exile in Elba. In Brussels, 18 year-old Helen Whitley, knows that war with France between Britain and her allies, is inevitable. A talented artist, Helen is aware of the anxiety and fear underlying the balls, breakfasts, parties, picnics and soirees, held by the British. 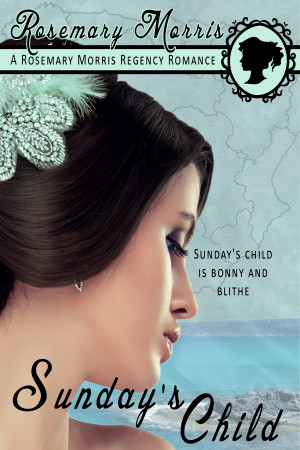 Georgianne Whitley’s beloved father and brothers died in the war against Napoleon Bonaparte. While she is grieving for them, she must deal with her unpredictable mother’s sorrow, and her younger sisters’ situation caused by it. Georgianne’s problems increase when the arrogant, wealthy but elderly Earl of Pennington, proposes marriage to her for the sole purpose of being provided with an heir. 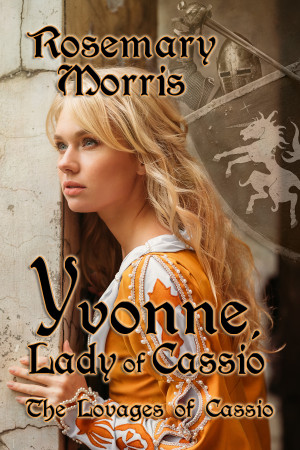 When Yvonne and Elizabeth, daughters of ruthless Simon Lovage, Earl of Cassio, are born under the same star to different mothers, no one could have foretold their lives would be irrevocably entangled.

You have subscribed to alerts for Rosemary Morris.

You have been added to Rosemary Morris's favorite list.

You can also sign-up to receive email notifications whenever Rosemary Morris releases a new book.