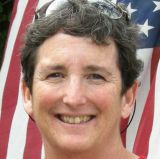 In 2004, Carol crowned a lifetime of competitive achievement by winning two races for the USA at the Olympics, and she still wins the occasional sailboat race. Since retiring from Olympic sailing, Carol has focused on writing about boats, both fiction and fact.

For more information and to find a list of current books, drop in at carolnewmancronin.com.

You have subscribed to alerts for Carol Newman Cronin.

You have been added to Carol Newman Cronin's favorite list.

You can also sign-up to receive email notifications whenever Carol Newman Cronin releases a new book.