Captain Charlie Plumb has lived what he believes to be the American Dream. As a farm kid from Kansas, he fantasized about airplanes although he felt certain he would never have the opportunity to pilot one. It would be the United States Navy who afforded Plumb the opportunity to live out that dream.

After graduating from the Naval Academy, Plumb completed Navy Flight Training and reported to Miramar Naval Air Station in San Diego where he flew the first adversarial flights in the development of what would be called The Navy Fighter Weapons School, currently known as “TOP GUN”. The next year, Plumb’s squadron the Aardvarks launched on the Aircraft Carrier USS Kitty Hawk with Fighter Squadron 114 to fly the Navy’s hottest airplane, the F-4 Phantom Jet. Code named “Plumber”, Charlie Plumb flew 74 successful combat missions over North Viet Nam and made over 100 carrier landings. On his 75th mission, just five days before the end of his tour, Plumb was shot down over Hanoi, taken prisoner, tortured, and spent the next 2,103 days as a Prisoner Of War.

Following his repatriation, Plumb continued his Navy flying career in Reserve Squadrons where he flew A-4 Sky Hawks, A-7 Corsairs and FA-18 Hornets. His last two commands as a Naval Reservist were the on the Aircraft Carrier Corral Sea, and at a Fighter Air Wing in California. He retired from the United States Navy after 28 years of service.

Where to find Charlie Plumb online 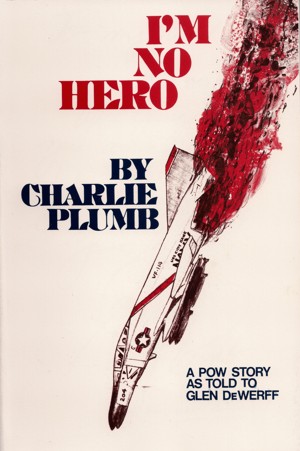 Im No Hero by Charlie Plumb
Price: $9.99 USD. Words: 75,780. Language: English. Published: February 20, 2013. Categories: Nonfiction » Biography » Military biography, Nonfiction » Inspiration » Personal inspiration
I’m No Hero is an autobiography of Captain Charlie Plumb’s life; it is the story of the Vietnam POW’s who faced an isolated world of degradation, loneliness, tedium, hunger and pain; most significantly, it is a story of hope, for it deals directly with how the techniques used by the POW’s just to survive are the same techniques you and I apply in daily life.

You have subscribed to alerts for Charlie Plumb.

You have been added to Charlie Plumb's favorite list.

You can also sign-up to receive email notifications whenever Charlie Plumb releases a new book.