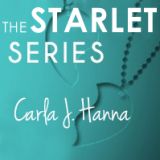 Carla J. Hanna is the author of award-winning young adult romance and coming of age fiction novels for readers who enjoyed Nicholas Sparks' A Walk to Remember, Elizabeth Gilbert's Eat, Pray, Love, Gayle Forman's If I Stay, or John Green's The Fault in Our Stars.

A former housewife of Santa Monica, California, Ms. Hanna shares an insider's perspective on Hollywood and celebrity influence in her multicultural novels. Mrs. Hanna urges her readers to take control of the messages about sexuality, youthfulness, and beauty coming from Hollywood and stand up for their own personal convictions rather than follow the social media herd.

Starlet's Man - Lights, Camera, and Lies. High school student athlete, Manny Biro, is caught between the boy he should be and the man he wants to become.

Starlet's Run – Love. Intentions. Acting. In a world where an actress is a product and everyone is a critic, can young love survive? Should it?

Starlet's Light – Love. Trust. Acting. Young Hollywood actress is 'so done' with acting. She gives up the fight until she sees the light.

Starlet's End – Love. Justice. Living. The Hollywood elite are pointing fingers at those responsible for anti-aging drugs. Can justice be served? TBR 2015

What should I expect from the Starlet Series?
The first three novels, Starlet’s Web, Starlet’s Run, and Starlet’s Light, are fictitious memoirs that Liana Marie writes while recovering in the hospital. The reader will notice a maturity of narrative voice and awareness from each book in the series. The protagonist’s narrative self-reflection grows as she becomes more self-aware. Starlet's End is the fourth novel from Lia's point of view and the last novel of the series.

Liana Marie Michael writes her first memoir as she deals with the consequences of being a child actor. Find out what makes Lia an Oscar-winning actress as you think about your role in shaping the films you see and the social media in which you engage.

In Starlet’s Web, Liana Marie is torn between mixed-messages, mostly impacted by Hollywood’s focus on being sexy. She talks in monologues and thinks in stories as do her industry-consumed peers. What is real is in question.

2. Starlet’s Run (The Starlet Series #2) – In a world where an actress is a product and everyone is a critic, can young love survive? Should it?

In Lia’s second memoir see how she and Manuel cope with hardship while they look to others to make decisions for them, trapping themselves into indecision. Find out what it takes to be a star as Lia runs lines in both her acting and personal lives. Think about how the scripts you have memorized affect you in your daily life. Do you whine about pain or do you accept it and make the most out of anything positive?

In Starlet’s Run, Liana Marie is torn between youthfulness vs. maturity, health vs. sickness. She clings to the idea of marriage and security while the adults around her urge her to grow up first. She and Manuel both discover the good and bad in themselves and each other as they begin to speak for themselves rather than “run lines,” actor-lingo for practicing lines in a movie script.

3. Starlet’s Light (The Starlet Series #3) – Young Hollywood actress, Liana Marie Michael, is ‘so done’ with acting. She gives up the fight until she sees the light.

Lia’s final memoir reveals her struggle with the exploitation inherent in being an actress and her search for friendship and acceptance. Find out how a star lives on set and see the hard work put into making epic films.

In Starlet’s Light, Lia’s situation overwhelms her. She struggles through the 5 Stages of Grief: denial/isolation, anger, bargaining, depression, and acceptance and, like most of us, makes a lot of ‘human’ mistakes in doing so. But she tells the truth as she copes, opening her heart to new possibilities.

4. Starlet’s End (The Starlet Series #4) – The Hollywood elite are pointing fingers at those responsible for anti-aging drugs. Can justice be served? TBR 2014

The fourth novel, Starlet’s End, is an active first-person narrative and concludes Lia’s journey. It explores our society’s subtle acceptance of performance-enhancement drugs or plastic surgery as a justifiable means of competition. Explore what it means to judge and be judged. Is justice retaliation, blame, or responsibility? How can we change Hollywood’s obsession with youth, sex, and unhealthy, skeleton bodies (both the dead ones littering all action films and the actors who shoot them)?

The following works focus on other points of view:

Join over 28,000 Wattpad readers engaged in drafts of Starlet’s Man.

7. Work in process: Starlet’s Six (The Starlet Series, #3.5) – Interested in what it is like to jet-set around the world as an anonymous heir to billions? Read about Pierre, Evan, Amelie, and Sandrine in the novella, Starlet’s Six.
What is unique about the Starlet Series?
Join main characters Lia and Manny in their journey from teens in love to responsible adults. The Starlet Series is a snapshot of a Hollywood star’s life as she gains independence from those who control her every move. This is not a paparazzi-laden story. It is a realistic, coming-of-age fiction. The actress is a Lawrence or Steinfeld, not a Lohan. She’s an isolated actress with the responsibility of the success of multimillion dollar projects – a product of Hollywood – a young woman.

I have not read anything like my series in the young adult or new adult genre because few authors have had the unique experiences I've had. I didn't make the setting or environment up. I lived in the house I describe in the series with an incredible view of the Santa Monica canyon and ocean view. My kids played with the kids of celebrities. I saw first-hand the inherent contradiction between church values and sexy pop culture as I sat in church with celebrities and their children. Yes, those kids will question what is right and wrong as they fall in love.

You have subscribed to alerts for Carla J. Hanna.

You have been added to Carla J. Hanna's favorite list.

You can also sign-up to receive email notifications whenever Carla J. Hanna releases a new book.