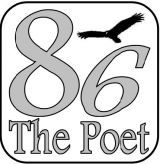 David Klenda, also known as Eighty Six, is a poet, journalist, cook and cocktail maker. He supports his wife and sons with a combination of freelance writing and hospitality. Flexible and adaptable by nature, he accepts all writing challenges.

"Inside the Skull of David Priest" is a novella loosely based on Eighty's career in the hospitality business. It is twenty-four hours in the life of the "Door-Gunner of Drinks" David Priest. Already ideas for a full-length novel are bouncing around the author's head.

Where to find Eighty Six online

You have subscribed to alerts for Eighty Six.

You have been added to Eighty Six's favorite list.

You can also sign-up to receive email notifications whenever Eighty Six releases a new book.