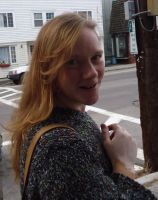 Cedar Sanderson, mother of four and aspiring author, grew up without television in the Alaskan bush. This and learning to read at age four have skewed her world toward books. A house full of books and a part-time librarian job keep that going to this very day. She writes what she wants to read herself, and hopes someday her children will like her books. Until then, they all live together on a farm in New Hampshire and read late into the night. She writes because she can’t help it, gets a story stuck in her head and has to write it out or it bothers her. Which led to enjoying the crafting of stories over the years, but she didn’t seek to become published for a long time – she was content just to write. Now, she’s sharing some of her work.

Where to find Cedar Sanderson online

You have subscribed to alerts for Cedar Sanderson.

You have been added to Cedar Sanderson's favorite list.

You can also sign-up to receive email notifications whenever Cedar Sanderson releases a new book.