Kathryn Lasky is the Newbery Honor author of over 100 fiction and nonfiction books for children and adults. Her books range from critically acclaimed nonfiction titles such as Sugaring Time and historical fiction in the Dear America series to the wildly popular Guardians of Ga'hoole fantasy series about owls. She was born and grew up in Indianapolis, Indiana. She received a bachelor’s degree in English from the University of Michigan and a master’s degree in early childhood education from Wheelock College. When she was in elementary school, she was labeled a "reluctant reader." The label was only half right, as she explains: "The truth was that I didn't really like the kind of books they had you reading at school — the 'See Dick, see Jane' books. So I made a voluntary withdrawal from reading in school. But I loved the books my mom was reading to me, books like Peter Pan and The Wonderful Wizard of Oz." It was stories like these that led her to think up her own stories, although she says, "I never told anyone or showed anyone my stories."
Lasky's interests as a writer range far and wide. To do research for her nonfiction books, she's been everywhere from a sheep-shearing farm, to a doll maker’s workshop, to a small sailboat crossing the Atlantic, to a paleontology dig in Montana. She says that whatever she's writing, fiction or nonfiction, "the most important thing is if a story is real. Even in my nonfiction books, telling a story is more important than reciting the facts. I am sure a lot of folks must think I'm rather scattered doing all these different books. But to me, the whole point of being an artist is to get up every morning and reinvent the world."
She is married to Christopher Knight, who has photographed 18 of her nonfiction books, and lives in Cambridge, Massachusetts. Her New York Times bestselling series “Guardians of Ga’Hoole” is the basis for the Warner Bros. feature film “Legend of the Guardians.”
Her awards include:
2011 Anne V. Zarrow Award for Young Readers’ Literature

Smithsonian Notable Books for Children list for 2009: One Beetle Too Many

ALA Best Book for Young Adults: Beyond the Burning Time

Library of Congress Notable Book and Parents' Choice Honor Book: The Librarian Who Measured the Earth

National Academy of Science, Best Book of The Year: Monarchs 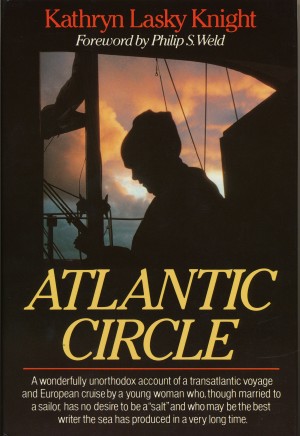 A wonderfully unorthodox account of a transatlantic voyage and European cruise by a young woman who, though married to a sailor, has no desire to be a "salt" and who may be the best writer the sea has produced in a very long time. A Dolphin Book of the Month Club selection.

You have subscribed to alerts for Kathryn Lasky Knight.

You have been added to Kathryn Lasky Knight's favorite list.

You can also sign-up to receive email notifications whenever Kathryn Lasky Knight releases a new book.