C.Hampton Jones only started to publish her Illustrated Historical Fiction or Graphic Novels (she calls them Storybooks) in 2011.
Her Regency Romantic Warriors e-books are 'Storybook' novels, which means that they are enhanced with artful illustrations (collages) as an extra for e-book readers. All her published English, German, Dutch and French e-books of the Regency Romantic Warriors Series are available on Smashwords.
After finishing her 9th and last novel in the Regency Romantic Warriors Series ('Homecoming' available as of October 2015) she started writing historical (parnormal- spiritual) novels in her 'Sacred Artefacts' series. The Dutch novel 'Hemelse Ogen' in this series is already available and the English novel Heavenly Eyes will be published in winter 2015/2016.
Apart from translating her novels in Dutch, she is now writing the historical- spiritual novel 'The Laysister' (year 1291- 1314) about the reappearance of Jesus Christ's shroud and the search for it when it was stolen when Philip Le Bel sent most of the Knights Templar to the stake.

Please visit: http://www.champtonjones.com/page2.html when you want to know more about her. (Extensive Who-hub interviews.)

What's the story behind your Regency Romantic Warriors Series?
I started reading Regency romance and thought it would be fun to try to write my own book about that time period.
I did read a lot of Sharpe books (Bernard Cornwell) and I liked to put the adventures of officers in the British army into my own books as well. The war with Napoleon gives me a lot more adventure to add. Only romance without a bit of a plot is not very exciting, I think. Hence the appearance of the Regency Romantic Warriors. It may seem quite different that I like to express the thoughts of the men as well as the women in my books and I sometimes give the men a more prominent place than the women for the sole reason that in Regency times men were definitely able to lead a more adventurous life than women.
I started to write a tome of 600 pages and then decided it would be best to make the tome into a few smaller books.The book I wrote first, is now number 4 in my Regency Romantic Warriors series. (A Mercenary Major part 1.) Together with its sequel (novel 5) I think it is the most romantic book of the series. You can clearly see the 'romantic influences' I got when reading huge amounts of Regency Romance in those days.

I inserted Lionel's story - A Major's Mistake (volume 6) into my first tome as well, but it became so entirely different from: A Mercenary Major, novel 4+5, that I made it into a separate book. That was not an easy feat and I had to revise the book numerous times.

Lochiel's story - A Lieutenant at Large (novel 1) I wrote as an entirely separate novel. I did not foresee at all that it would become number 1 in a whole series. Mind, I only published Volume 1 a few months before 'About Officers and Gentlemen' (Volume 7) was published!

One day my attention was attracted to the historical facts of the rounding up of gays in 'The Vere Street Coterie' in 1810 with the ensuing executions. That was when I got inspired to write Hengist's story - A Major in Distress, part 1+2 (Volume 2+3 in the Regency Romantic Warriors Series). It was not that I was championing gays (and lesbians) rights but I had to find a reason why Hengist's brother Philip was not remotely interested in consuming the marriage with the beautiful and rich Marguerite. That I put my finger on the shameful treatment of gays in those days is an extra 'bonus'. I must agree that Novel 2 and 3 in the series have a darker quality than e.g. the romantic novel 4 and 5, but it has everything to do with my development as a novel writer. I was not content with only writing very romantic historical fiction where the heroine and hero are almost superhuman and their romance is the most important item, disregarding the reality of life in those times.

Book 7 is about the period between the wars in 1814 and 1815. It is e.g. also the description of what happens to Lizzie Campbell (after her adventures in the first novel - A Lieutenant at Large) and her marriage to Lord John. What I like most in this novel is the insight you get in marriages in those days. Quite a lot of the men are unfaithful, but it is truly no wonder as the people of the Quality were mostly forced into advantageous marriages, where love and affection were the most disregaded emotions. How women coped is also an interesting story.

Although Book 8 is called Waterloo Warriors it does not tell too much about the last battle against Napoleon in 1815. Many books have been written about the technicalities of that battle. The story concentrates more on Jeffrey Burroughs' unexpected love for Bertha Dunstead, who is too proud to become his mistress and Peter Wallace, who loves his dead wife's sister Amelia Aubrey, who is married to a very dangerous and abusive spy. Waterloo Warriors plays for the bigger part in Brussels, close to Waterloo. I do insert a lot of new information about everything surrounding Waterloo and Quatre Bras, information that popped up in the last 200 years and it puts the whole myth around the Battle of Waterloo and Quatre Bras into a different light.

The Regency Romantic Warriors Series will consist of 9 books.. The 9th book is called 'Homecoming' and will be a book of solutions and (maybe not so) happy endings.
The books A Lieutenant at Large, novel 1, Both novels 'A Major in Distress together (novel 2 and 3), Novel 4 and 5 both (A Mercenary Major) can be read not in sequel with the series, but I would not advise it, as many characters come back in other novels in a bigger or lesser role.

I noticed that out of curiosity readers like to jump from novel 1: A Lieutenant at Large, to novel 7 about Officers and Gentlemen, as Lizzie's story continues in 7, but there will be so many new characters introduced that it will only be very confusing to try that jump.
Wat made you design and write Graphic Novels or illustrated historical fiction?
I am a real history freak, a romantic, a writer and an illustrator. I like to create pleasant things you can look at.
For the first books I wrote (now number 4 and 5 in the Regency Romantic Warriors Series) I started to design a collage of pictures and soon the idea to actually illustrate all my books was born.
Instead of 'Graphic Novels', my books are 'Novels with Graphics.'

I designed collages of different (shopped) pictures on top of each chapter in my novels.
I did not put an illustration on each page of the books, as telling a story needs a lot of word space even if 'a picture tells a thousand words.'

Just like the booktrailers I created, the graphics almost take more time to design, than to actually write a book.
I like to be in the 'niche' Illustrated Historical Fiction.
Read more of this interview.

Booktrailer of 'A Major in Distress' Part 1+2
In a Major in Distress Part 1 Deceptions and part 2 Death's Sting, major Hengist Agnew needs to do what ever he can and is capable of to save his gay brother from the gallows even when viscount Lord Philip Morvern has married Hengist's childhood sweetheart. Those books are part of C.Hampton Jones' Regency Romantic Warriors series Novel 2+3 This e-book is a dive into the forbidden gay world of London of 1809-1811. This Video is deemed of Adult Content.

C. Hampton Jones' Vol. 6 in the Regency Romantic Warriors Series: A Major's Mistake
Lionel Armstrong, Major with the King's Cavalry is wounded again on his way home to his father's earldom after the battle of Toulouse in 1814. A beautiful girl, Robin, nurses him back to health. Her stepmother who mistakes Lionel for a footman at a costumed ball, abducts them to Gretna Green where they are forced to marry. They escape, to be shipwrecked in a storm...

C. Hampton Jones' Waterloo Warriors
Officers and their loves around the most famous battle against Napoleon in 1815

A Lieutenant at Large (Vol.1 of the Regency Romantic Warriors series)
Price: $2.99 USD. 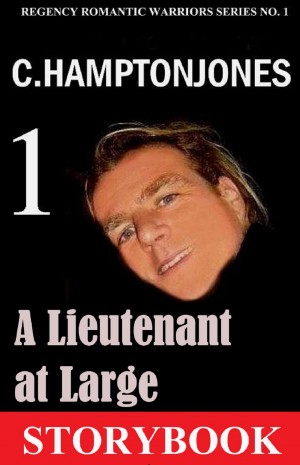 A romantic adventure: Lochiel Cameron, a 25-year old lieutenant in the 42nd Scottish regiment, has to escort Elisabeth (Lizzie) Campbell from Ayre to Edinburgh. Lizzie is to marry Lord John Montgomery, second son of a duke. Lord John hates it that he has been forced to marry Lizzie. Lizzie, angered by Lord John's indifference starts an affair with Lochiel with far reaching consequences.(Vol. 1)

You have subscribed to alerts for C. Hampton Jones.

You have been added to C. Hampton Jones's favorite list.

You can also sign-up to receive email notifications whenever C. Hampton Jones releases a new book.