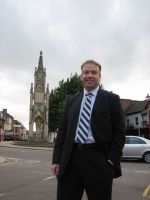 Chris lives in Pitsford, in the Constituency of Daventry which he represents in the UK Parliament. He became Prospective Parliamentary Candidate for Daventry back in June 2006 and was elected as Member of Parliament for Daventry in the May 2010 General Election.
As MP he has been involved and led many local campaigns. Has helped many anti-wind farm campaigns organize and find their voice and also been involved with the campaign against unwanted development based on plans issued by the “Joint Planning Unit” – a quango he looks forward to getting rid of.
Chris is an advocate of smaller government and responsible public spending. A fierce Eurosceptic, he hopes his experience in Brussels will be useful to any future Conservative government. He was one of the authors of "Direct Democracy" and is a passionate "localist". He currently sits on two Select Committees in the House of Commons: the Public Accounts Committee and the European Scrutiny Committee.

You have subscribed to Smashwords Alerts new release notifications for Chris Heaton-Harris MP.

You have been added to Chris Heaton-Harris MP's favorite list.

You can also sign-up to receive email notifications whenever Chris Heaton-Harris MP releases a new book.