Christine Plouvier has had several exciting careers: military intelligence, childbirth educator/doula, registered nurse, homeschooler, and now, Novelist! Her interests include the life transitions that can drive – and be driven by – the hidden agenda of the mind. She lives in Indiana with Oliver, a white cat who has black spots, soft fur and a good disposition, but who answers only to “Kitty.”

What's the story behind your latest book?
I was in the middle of graduate school, and busy with research and technical writing, when I awoke one morning on or about mid-February, 2009 with a scene and snippet of dialogue in my head: a man and a woman talking in an apple orchard. The scene could have come from a book, and I wondered where it took place. The response was: Ireland. It was from a novel that didn’t exist: one that I had to write.

I was stunned. What I knew about Ireland could have been written on the back of a postage stamp--and a small one, at that. Saint Patrick and the snakes. The Potato Famine. Vague, childhood memories of internecine warfare televised on the six-o’clock news. And that in Gone with the Wind, the character Gerald O’Hara had named his ante-bellum Georgia plantation “Tara,” after a place in County Meath--wherever that was.

But you don’t fight with the Muse, so I bought some old-fashioned No. 2 pencils and scribbled for six weeks. After transcribing my notes, I found that I’d written about 45,000 words: beginnings, middles and ends of scenes--all the easy interpersonal stuff. Then I began to remedy my 32,595-square-mile knowledge deficit. When Saint Patrick’s Day had come, I’d immersed myself in the local public television station’s Irish travelogue programming marathon. The local library offered only a shelf of Irish fiction, some tourist guides, a set of Irish language lesson cassettes in the Ulster dialect and a Rick Steves DVD. So, I started surfing the Web, where I discovered the joys of Irish journalism, and copied Hiberno-English usage into a spreadsheet workbook.

I acquired seven shelves of books, music, video discs and Gaeilge lesson recordings. I committed to memory the names of the 32 Irish counties, and practiced writing them in their proper places on a blank outline county map of the island until I could do it in less than three minutes. I bought Irish cookbooks and cooked Irish recipes, and bought a lap harp and wrote arrangements of tunes by Turlough O’Carolan. I made a pilgrimage from Dublin to the shores of Connemara. Where I didn’t go in person, I did virtual hikes via Google Maps Street View. I now know more about Irish history, culture, geography, wildlife, weather, agriculture, politics, psychology, religion and whatever you’re having yourself, than I ever imagined knowing--and in some cases, more than I wanted to know.

All this research dunged the kudzu-like growth of a nearly 200,000-word novel called "Irish Firebrands." I didn’t outline, but created a calendar for continuity, while I observed the scenes that happened in my head and wrote what I saw and heard. The scene and snippet of dialogue became part of Chapters 23 and 24. The last big plot hole closed at 11:30 PM on January 27, 2012; I spent nine months revising the manuscript; on Halloween I indie-published the first of several Beta-reader versions; and then I spent about eight months fixing typos and formatting glitches, while trying out different trim sizes, font sizes, paper stock and illustrations, until settling on the final print edition. Once that was out of the way, I focused on setting up the eBook for distribution at Smashwords. Now I'm working on an audiobook edition, so my mother and other visually impaired persons can have the "Irish Firebrands" experience, too.
What motivated you to become an indie author?
Knowing that "Irish Firebrands" had a story--and a style--that avid aficionados of several genres were looking for, but that traditional publishers on both sides of the Continental Divide were too far removed from real readers, to appreciate. Traditional publishers are big businesses that need to be run efficiently, so I don't fault them for looking out for their bottom lines in a way with which they've become comfortable. But telling the public, "This is what we think you should be reading," is not working the way it used to. More and more, readers are flipping through pages, saying, "I don't want to read that," and putting the books back on the shelf.

Now, I'm new at self-publishing for a large market, so I'm still climbing the learning curve, such as in experimenting with my book's Smashwords sampling percentage. But pretty soon I'll find the right sample size that meets the information needs of thoughtful readers who are considering adding "Irish Firebrands" to their personal libraries. Writing it was such an exciting experience--I want to share that enjoyment with them!
Read more of this interview.

Where to find Christine Plouvier online 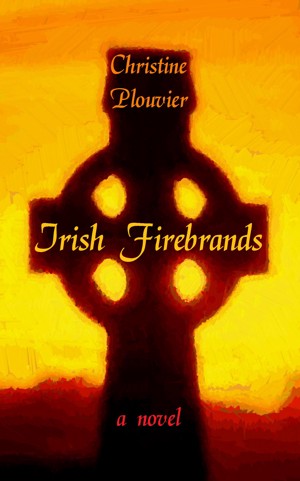 Irish Firebrands by Christine Plouvier
Price: $9.99 USD. Words: 199,230. Language: Commonwealth English. Published: July 2, 2013. Categories: Fiction » Literature » Literary, Fiction » Romance » Contemporary
How far will a man go, to know his father? To be a father? All his life, Dillon Carroll has felt cut off from the past by his lack of parents. Half his life, he’s felt cut off from the future by his lack of posterity. Accompany Dillon as he follows his last hope for reconnecting with his roots, and to fulfill his dream of belonging somewhere, to someone, forever. Go to Ireland this Father’s Day...

You have subscribed to alerts for Christine Plouvier.

You have been added to Christine Plouvier's favorite list.

You can also sign-up to receive email notifications whenever Christine Plouvier releases a new book.