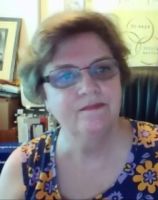 Connie J Jasperson lives and writes in Olympia, Washington. A vegan, she and her husband share five children, eleven grandchildren and a love of good food and great music. She is active in local writing groups, and is the Olympia area municipal liaison for NaNoWriMo. Music and food dominate her waking moments and when not writing or blogging she can be found with her Kindle, reading avidly.

You can find her blogging on her writing life at: Life in the Realm of Fantasy
http://conniejjasperson.wordpress.com

She also blogs on her reading life every Friday on Best in Fantasy
Http://bestinfantasy.blogspot.com

Huw, the Bard, a novel that takes you to the world of Waldeyn, and a medieval alternate reality. Fleeing a burning city, everything he ever loved in ashes behind him, penniless and hunted, Huw the Bard must somehow survive. Available as an ebook and in paper.

Tales From the Dreamtime – a novella consisting of three modern fairy tales told in a traditional style. Available as an ebook, in paper, and as an Audiobook, narrated by the wonderful voice actor, Craig Allen.

Tower Of Bones Series:
Book 1, Tower of Bones, takes the reader to Neveyah, a world where the gods are at war, and one family holds the key to the salvation of the worlds.

Book 2, Forbidden Road, Picks up six years after the end of Tower of Bones. Destiny and ruin collide in the Valley of Mal Evol, and one will not return.

You have subscribed to alerts for Connie J Jasperson.

You have been added to Connie J Jasperson's favorite list.

You can also sign-up to receive email notifications whenever Connie J Jasperson releases a new book.