Joseph Courtemanche is a former Police Officer and Middle East/North Africa analyst. He is a distinguished veteran of the Naval Security Group of the United States Navy, and an Arabic linguist with training at the University of Minnesota and the Defense Language Institute (Honors Graduate).

Joseph holds several military awards, including two flag letters of commendation for his work in providing real-time intelligence support to commanders in the field. His experience provides the background that's crucial to his writing in the thriller genre. He is a graduate of the University of Minnesota, Minneapolis, and holds degrees from two other colleges as well.

As a performer, he's appeared on television in a variety of commercials, and does voice over work for both radio and television. He delights in doing his own audio books.

His greatest joy is working as a professional Santa for the last fifteen years, appearing in a number of television spots as the Jolly Old Elf.

He lives in Saint Paul, Minnesota with his wife and dog. Both of whom tolerate him fairly well.

Where to find Joseph Courtemanche online 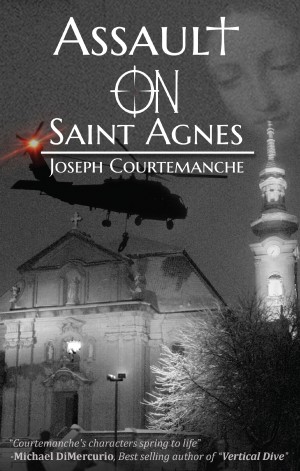 Assault on Saint Agnes by Joseph Courtemanche
Price: $4.99 USD. Words: 81,970. Language: English. Published: March 26, 2016 by apgroup. Categories: Fiction » Adventure » Action
When terrorists assault Saint Agnes Church in Saint Paul, Minnesota, they expect to find a congregation of lambs: they get Bobby Kurtz instead. An unrepentant Cold Warrior, Kurtz destroys the terror cell with violent finality. Against his will, Kurtz is pulled back into the life he left behind decades before. He reluctantly picks up the burden of hunting the terrorists in our midst.

You have subscribed to alerts for Joseph Courtemanche.

You have been added to Joseph Courtemanche's favorite list.

You can also sign-up to receive email notifications whenever Joseph Courtemanche releases a new book.