"When I was in high school, my chemistry teacher approached me and asked with a sly grin, "You interested in mining?"
I told him absolutely not. I was going to be a writer.
Little did I suspect that he wanted to send me to a student conference on metallurgy where I could seek the fellowship of like-minded teens on a minimally supervised road-trip to the Big City.
Undeterred by my abrupt negative response, he grumbled, "Well, you're interested in mining your own business, aren't you?"
And he sent me anyway.
Now I realize I should've listened more carefully to everything he said."
###
Gerald Everett Jones is the author of the Rollo Hemphill series of comic novels, including My Inflatable Friend, Rubber Babes, and the forthcoming Farnsworth's Revenge. He holds a Bachelor of Arts with Honors from the College of Letters, Wesleyan University, where he studied under novelists Peter Boynton (Stone Island), F.D. Reeve (The Red Machines), and Jerzy Kozinski (The Painted Bird, Being There).

Gerald Everett Jones reads "Rubber Babes"
The author of My Inflatable Friend: The Confessions of Rollo Hemphill reads from the second book in the comic fratire series. Clueless tyro Rollo continues to fail upward to become the youngest-ever director of a multimillion-dollar charitable foundation. Far too late, he begins to suspect it's a money laundry for the Secret Government. But his paranoia becomes most acute when he becomes entangled with a succession of women he calls "rubber babes." 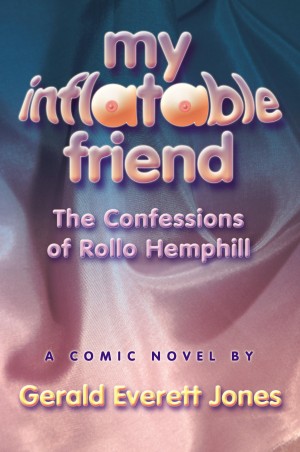 Dumb stunt with celebrity look-alike doll backfires. Boy fails upward! A car jockey at a luxury hotel in Beverly Hills, youthful hacker turned-slacker Rollo Hemphill devises a screwball scheme for making his girlfriend jealous. Through a silly but magical ruse, our hero gets everything he’s dreamed about--except the girl he really wants--or any sex at all!

You have subscribed to alerts for Gerald Everett Jones.

You have been added to Gerald Everett Jones's favorite list.

You can also sign-up to receive email notifications whenever Gerald Everett Jones releases a new book.