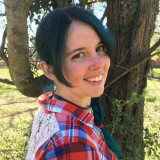 Dana Fraedrich is an independent author, dog lover, and self-professed geek. Even from a young age, she enjoyed writing down the stories that she imagined in her mind. Born and raised in Virginia, she earned her BFA from Roanoke College and is now carving out her own happily ever after in Nashville, TN with her husband and two dogs. Dana is always writing; more books are on the way!

When did you first start writing?
I think I've always written since I could spell at least to some extent. I always played out little scenes and characters in my mind when I was daydreaming. I still do when I've got a new idea rolling around in there. I was about seven or eight when I got an American Girl doll. With the doll came a little book in which you were meant to write your doll's story, so I did that. And I think I was thirteen when I actually sat down at a computer and started to write something for myself. I haven't stopped since then.
Do you remember the first story you ever wrote?
I think it was in second grade around Halloween. We had to write a story to go along with a haunted house picture. I wrote a story about a girl who was dared to go into the house and met a vampire. The vampire turned out to be nice, and I learned the difference between the words hoovered and hovered.
Read more of this interview.

Where to find Dana Fraedrich online

You have subscribed to alerts for Dana Fraedrich.

You have been added to Dana Fraedrich's favorite list.

You can also sign-up to receive email notifications whenever Dana Fraedrich releases a new book.