He has written a number of articles, and moreover, he has made guest appearances on TV, including Channel 9's A Current Affair, Channel 7's Today Tonight.

He also featured in Good Health Magazine. In addition, Daniel is a popular speaker at industry conferences. As a clinician, Daniel's main work involves directing, consulting and overseeing Alternative Foot Solutions, which is a very successful podiatry practice in Sydney, Australia, which specialises in Foot Mobilisation Therapy; this service is unique in New South Wales, as no other clinic specialises in these treatments.

Daniel lives at Sydney Northern Beaches with his wife and son; he loves to surf and is a very active person.

One of the main reasons Daniel chose podiatry was because he was treated by an excellent podiatrist when he was younger, and it made such a positive impression that he decided to pursue a career in the field. Daniel qualified as a podiatrist (BappSc (Pod) M.A.Pod A.) in 2002 at the University of Western Sydney.

The first year after he graduated university and started practicing podiatry, Daniel had a number of consecutive female patients who presented to him in a short space of time, all in a distressed state. There was one female patient in particular who presented in a very frustrated state after he had fitted her into a pair of orthotics a month earlier. She was quite distraught, because despite spending many hundreds of dollars on a set of orthotics, she could no longer fit into her shoes.

The discussion escalated into a disagreement about shoes, and she became quite emotional about it. She expressed frustration about not being able to wear shoes that simultaneously looked good and assuaged her foot pain, because the orthotics didn't fit into her shoes. Daniel thought: “There must be some other option.”. He saw a course on foot mobilisation advertised, so shortly after, he completed one of those courses. On the first day of the course, he thought: "This is quite amazing.".

After doing that first set of training, he was extremely impressed with the results, so he started to treat a whole range of people using the methods he had learned in the training. He treated each patient far more extensively than what he needed to, and for the first six months, he actually treated a whole group of people free of charge to ensure it worked. What he soon found was not only was the treatment better, it was far superior to orthotics, and most impressively, compliance levels were through the roof. His patients were extremely happy, and his working existence was rendered much more enjoyable. By that stage, bunions had become an extremely prevalent issue. No-one had an option for treating bunions, so his thinking was that if foot mobilisation could realign the rest of your foot, why couldn't it realign your big toe?

Daniel's core business is foot mobilisation therapy, and he and his team are the only people in New South Wales who currently do it. In fact, there are only four other people within the country who provide this service to the same level that they provide it. The major benefit of their service is that they are able to treat and fix feet to help their clients avoid surgery and orthotics. One of the key advantages of the type of treatment they provide is that it opens up much broader footwear options for females.

After visiting their surgery for their initial consultation, it is not unusual for people to cancel their scheduled bunion surgery soon after. They've saved themselves thousands of dollars. It's self-evident then why Daniel and his team are keen to get the word out to people who're currently living with painful, untreated bunions. Nevertheless, Daniel contends that most surgeons are very ethical in terms of discouraging unnecessary and potentially damaging surgery, so they must be given credit. Daniel commented: “Most of the good ones with whom we interact tend not to be proponents of Foot Mobilisation, but by the same token, they will invariably try to talk people out of surgery as much as possible, because most good surgeons have no shortage of patients”.

The success of this treatment is explained by the fact that Daniel addresses the underlying cause; he changes the actual alignment of the patients’ joints, and then he also strengthens the muscles around it. This, in turn, stimulates the nervous system to change the neural patterns and gate patterns to reinforce that positive position. Anything else is a band-aid approach when it comes to treating bunions, and this includes orthotics.

Unlike Foot Mobilisation Therapy, orthotics fail to address the underlying cause of the bunion.

Where to find Daniel Fitzpatrick online 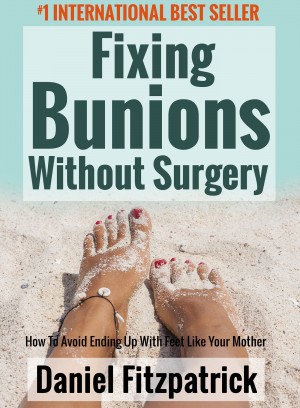 Fixing Bunions Without Surgery: How To Avoid Ending Up With Feet Like Your Mother by Daniel Fitzpatrick
Price: $1.99 USD. Words: 13,160. Language: Australian English. Published: May 15, 2016 by Evolve Global Publishing. Categories: Nonfiction » Health, wellbeing, & medicine » Healing, Nonfiction » Health, wellbeing, & medicine » Alternative therapies
This book is a simple and informative guide to absolutely everything you need to know about fixing your bunions, without surgery. Perhaps you have bunions, but have delayed seeing a podiatrist, or perhaps you have visited your GP, who has told you that surgery is absolutely your only option to treat them.

bunions    fixing bunions without surgery    what is a bunion

You have subscribed to alerts for Daniel Fitzpatrick.

You have been added to Daniel Fitzpatrick's favorite list.

You can also sign-up to receive email notifications whenever Daniel Fitzpatrick releases a new book.