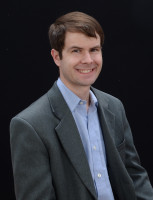 Daniel Sherrier is a writer based in central Virginia. This is the guy who writes the Earths in Space and RIP series, which you’ve doubtless heard much about. Occasionally, a play he’s written gets performed somewhere. He graduated from the College of William & Mary in 2005, where he earned a degree in the ever-lucrative fields of English and Theatre. Recently, he achieved his black belt in Thai kickboxing. And there was that one time he jumped out of an airplane, which was memorable.

When did you first start writing?
Comic books made me do it. Well, they made me feel like I needed to create my own super-heroes and write their adventures. At age nine, I was writing and drawing my own homemade, very terrible comic books, and by middle school I had pretty much given up on drawing. I never figured out how to stop writing, and I kept branching out to other forms, like books, plays, and screenplays.
What's the story behind your books?
With Earths in Space, I basically mixed some of my favorite things and put my own twist on it. The cast dynamic is similar to that of a super-hero team -- they all have their special skills and colorful personalities. It's a pretty tight group that can facilitate all sorts of fun pairings, but no one is super-powered here. They're almost like a Star Trek crew without any of the random red-shirted officers who get killed every episode. The series shows a love of exploration similar to what we see in Doctor Who, though EIS has no time-travel or aliens. In fact, I initially pictured the lead character, Amena, as a sort of female Doctor, in part, though after writing I realized that another character, the mega-genius Sela, has at least equal claim to that title, probably more as the series progresses.

With RIP, I had this random idea: "What if a person had to physically beat up ghosts?" But the series didn't take shape until I thought of the good ghost Serissa, a lively dead girl who's trying really hard to earn a place in Heaven, even though she doesn't know for a fact such a place exists. And she can't touch anyone except Rip, with whom she forms a sort of intimate yet strictly platonic friendship. She's slowly going bonkers but persevering anyway. Because of her, I knew I had a series.
Read more of this interview.

Where to find Daniel Sherrier online

You have subscribed to alerts for Daniel Sherrier.

You have been added to Daniel Sherrier's favorite list.

You can also sign-up to receive email notifications whenever Daniel Sherrier releases a new book.