Dave is an Emmy award winning Writer/Producer/Director who was pushed into the world of international intrigue at an early age when his family moved to Beirut, Lebanon during the wild 1970s. It would be an experience that would stick to him throughout his life, leading to his perusing a minor in Political Science while veraciously consuming Tom Clancy novels as fast as they could print them.
His true love however, is film and story telling, a craft in which he has made a successful career. From the moment he picked up his father’s super 8mm movie camera until now, the mixing of images and narrative, whether in a film, documentary, theater or 60 second commercial, has been Dave’s passion. His debut novel Kate’s Gifts reflects that in the way the story is told in a visual context, almost like a screenplay.
Dave pulls from his extensive professional knowledge of current affairs and the shifting geo-political landscape for the novel’s backdrop, but it is from his experiences in the recovery community from which he draws the material that gives Kate’s Gifts its heart and soul. His volunteer work as a recovery support group facilitator and sobriety coach, as well as the experiences of his own family’s struggles with substance abuse, are in part reflected in the lives of his characters. Kate’s Gifts is a story about the heartbreaking depths of addiction, but it is also about the soaring joy of triumph over substance abuse, and the hope from the knowledge that no matter how far one may fall, there is a way to climb out.

Where to find David McDonald online 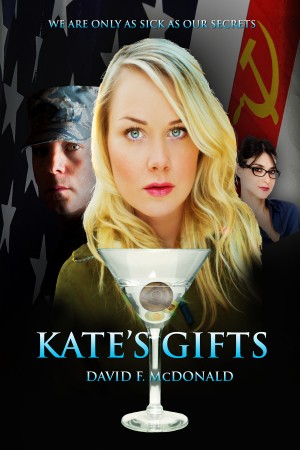 Kate's Gifts by David McDonald
Price: Free! Words: 103,070. Language: English. Published: October 30, 2014. Categories: Fiction » Thriller & suspense » Psychological thriller, Fiction » Themes & motifs » Spiritual & metaphysical
A provocative thriller about a woman's battle against a deadly enemy- herself. A suburban "soccer mom" fighting addiction. A soldier, scarred by the horror of war. Two very different lives, brought together by an act of betrayal, and then torn apart by a deadly secret. Soon all that stands between the American dream and a nuclear nightmare are a woman's gifts.

You have subscribed to alerts for David McDonald.

You have been added to David McDonald's favorite list.

You can also sign-up to receive email notifications whenever David McDonald releases a new book.