There was a long, lonely period of time when I was convinced I had Asperger's when it came to women. I couldn't really connect with women in an intimate way and I never really had the balls to approach the attractive ones. And it wasn't that I was a bad guy or anything, most people thought I was smart, thoughtful, funny but when it came to attracting women or becoming more than friends I had an IQ of about 46.

I started hanging out with some guys who were going out and getting laid pretty regularly. They, like me, weren't fashion models or multi-millionaires, but somehow they were getting laid consistently, while I was not. Going out with them I started analyzing the things they were doing that seemed to attract women and apply it myself.

Around the same time, I started reading the attraction literature out on the internet, and discovered that for every piece of good advice, you'd find ten pieces of contradicting, useless or advice that was just plain wrong. I spent dozens of hours devouring all the information I could, going out two to four nights, and trying literally EVERYTHING when it came to seducing women. I convinced myself that this was a part of my life I really wanted to fix. In years applying experimenting with this part of my life I did find some resources that really helped take my game to the next level and you can find links to those resources on www.attractionmadesimple.com

I don't want to give you an exact count of how many woman I slept with on my bio, bragging is never attractive, but let's just say my life has taken a 180 degree turn. I've picked-up, made-out with and had sex with women in their cars, in restrooms, or in their bedrooms on the same night (pretty consistently). I formed relationships with some of the coolest girls I've met in my life. Not to mention I experienced the most memorable and fun period of my life and it's still getting better!

The satisfaction that comes with knowing I CAN attract and connect with beautiful, gorgeous women that I once thought were out of my league, has had huge repercussions in the rest of my life. Not being sexually frustrated, I've found I'm more clear-headed. I've doubled my income, built stronger friendships and relationships with my family and no longer live in a state of perpetual anxiety and depression.

If the me of five years ago could see me now he'd probably feel like a prepubescent orphan stepping into Narnia. He'd probably pinch himself.

I made it a to write books for guys who were in the same position I once was. To help you get past this slump in your love life by taking you step-by-step, exactly what I and so many others have done to transform their 'game'. I'm Dave Ritter and I want to show you how to attract women.

Where to find Dave Ritter online 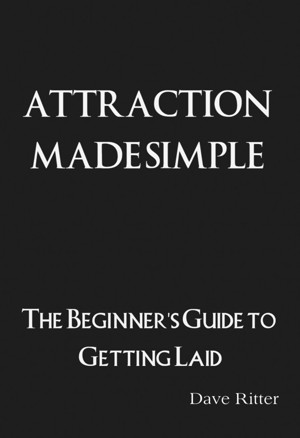 You have subscribed to alerts for Dave Ritter.

You have been added to Dave Ritter's favorite list.

You can also sign-up to receive email notifications whenever Dave Ritter releases a new book.