Charles David Keith Jr. was born in Muskegon, Michigan on February 13, 1942 and had a normal Midwestern childhood, graduating from high school in June of 1959. Two days later he was in Marine Corps Boot Camp in San Diego, California. After his tour of duty with the Marines, he worked as a police officer in Newport Beach, California and later in Muskegon, Michigan. There he met Nancy, the beautiful young woman who later became his wife and who convinced him to become a teacher, a decision he has never regretted. The Keiths raised two daughters. One is now an RN, and the other is a teacher. Because he specialized in ESOL, his career has taken them all over the world. He has taught in Saudi Arabia, El Salvador, Lithuania, South Korea, and China. This book was begun during his work in Lithuania in the 1990’s following the break up of the Soviet Union.

David Keith has written two novels for young adult readers. Hands Across Time is available from many retailers in Ebook and print form. The novel is set in a Native American village in 1642 and Montague, Michigan in modern times. An excerpt from this novel is included in this book. His second novel, Arthur, is to be released shortly in Ebook form. 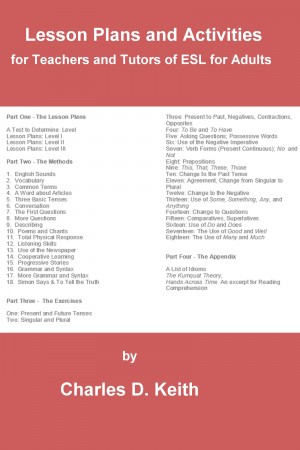 You have subscribed to alerts for Charles D. Keith.

You have been added to Charles D. Keith's favorite list.

You can also sign-up to receive email notifications whenever Charles D. Keith releases a new book.