Devon is an award-winning novelist from Durham, North Carolina. She grew up in metro-Detroit in an enormous extended family and was an artist as soon as she could hold a crayon. She put together her first book-with packing tape, cardboard and wrapping paper-in her aunt's magical bedroom full of bookshelves and a roll-top desk. In fourth grade she won a Young Laureate for the book she wrote about the death of her closest sibling and was pushed further toward her inevitable literary future by an enthusiastic and supportive teacher who let Devon sing her science reports and limerick her way through schooling. In junior high, she lost a Farmers Bureau poetry competition to a little girl who seems like quite a neat lady, now, on Facebook. In college, she rebounded with local awards for her poetry, a stint as editor-in-chief of the literary magazine Parnassus at her alma mater in Indiana, and almost received honors for her philosophy thesis, "The Obligation of Affluence." She was an assistant editor for The Gale Group before she relocated to Durham and became a mom and a freelance editor/writer/researcher.

Devon loves writing and hopes to keep bringing you novels, blogs, poems, short stories, and essays until well after she should have retired as anything else. She spends her time now between mothering, wife-ing, reading, painting, yoga, hiking, crafting, cooking and enjoying food, homemaking, traveling, and humanitarian and religious work. Except during the work day, when she is a full-time writer and indy publisher with Owl and Zebra Press.

In 2014, the world will witness the publication of her next two (very different) novels, "The Family Elephant's Jewels" and "The Night of One Hundred Thieves." As of 2013, her first novel, "Benevolent," is available widely for purchase on the internet (and at some bookstores and libraries) in paperback and e-book. The book has won recognition with the Paris Book Festival, Hollywood Book Festival, Beach Book Festival, Indie Reader (as an Approved book), and Reader's Favorite (Five Star Review). She also maintains her blog, The Starving Artist, at devontrevarrowflaherty.com.

What is the greatest joy of writing for you?
I enjoy the process of writing, especially the making-stuff-up part. I love approaching a story or a book and already having a whole world and all these characters living in my head. Then, even though occasionally it can be a slog, I love writing itself. Of course, having a book in my hands is also a real kick...
What do your fans mean to you?
I'm not at a point in my career yet where I have many fans, but I guess that just means each fan is very precious to me. Fans are the people I publish for, and I am very thankful for anyone who might give me a chance. When someone enjoys my book, that's a wonderful exchange.
Read more of this interview. 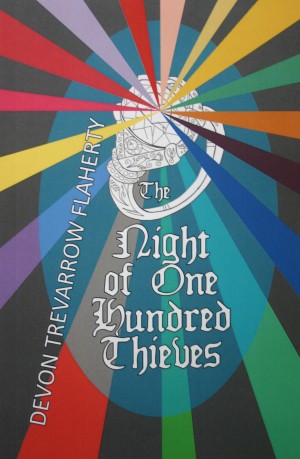 The Night of One Hundred Thieves by Devon Trevarrow Flaherty
Price: $2.99 USD. Words: 64,510. Language: English. Published: March 30, 2015. Categories: Fiction » Fantasy » Historical, Fiction » Fantasy » General
In this blend between fantasy and magic realism, the indelible Queen is on her death bed and the fate of her powerfully magical ring will be left to the devices of thirty-two unlikely thieves. Can Kentwend survive the Night of One Hundred Thieves? Includes a map, character guide, and a sneak peak at Flaherty's next book. 60,000 word estimate. 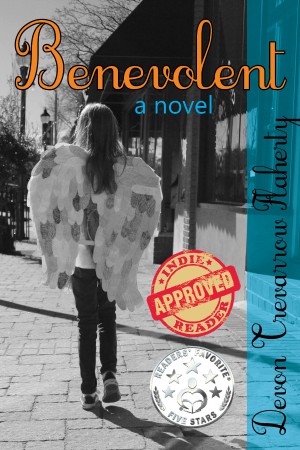 Benevolent by Devon Trevarrow Flaherty
Price: $2.99 USD. Words: 121,640. Language: English. Published: February 13, 2013. Categories: Fiction » Literature » Literary
In this award-winning, magic realism tale, all threads come together to paint a picture of the 80s and 90s in the Midwest, an intense and disaster-prone girl coming of age, her complicated ties to friends and family, and the legends that bind them all together, shaping their destiny. Includes a reader's guide and a sneak peak at the next book in this unconventional series.

You have subscribed to alerts for Devon Trevarrow Flaherty.

You have been added to Devon Trevarrow Flaherty's favorite list.

You can also sign-up to receive email notifications whenever Devon Trevarrow Flaherty releases a new book.