Bio:
Martin Lozano currently works for DOD. Martin was born in San Antonio Texas and earned a J.D. from Indiana University Mauer School of Law as well as B.A. from Purdue University. Martin is married to Shawn and has a Daughter named Kirsten. 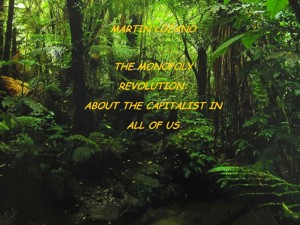 The Monoply Revolution by Martin Lozano
Price: $2.49 USD. Words: 30,470. Language: English. Published: August 4, 2012. Categories: Screenplays » Comedy
Blazing Saddles and Monty Python collide South American style. Think you had a bad day at the office? Dictator Don Miguel Fernando Llamas De Hoyos’ ruthless Mama died and left him in charge of a country where he’s the butt of every joke, the priest runs away from mass every Sunday, and his mortal enemy is more interested in playing Monopoly, and insulting his Mother than fighting.

You have subscribed to alerts for Martin Lozano.

You have been added to Martin Lozano's favorite list.

You can also sign-up to receive email notifications whenever Martin Lozano releases a new book.