Dan Buri's first collection of short fiction, Pieces Like Pottery, is an exploration of heartbreak and redemption that announces the arrival of a new American author. His writing is uniquely heartfelt and explores the depths of the human struggle and the human search for meaning in life.

Mr. Buri's non-fiction works have been distributed online and in print, including publications in Pundit Press, Tree, Summit Avenue Review, and TC Huddle. The defunct and very well regarded Buris On The Couch, was a He-Says/She-Says blog musing on the ups and downs of marriage with his wife.

Mr. Buri is an active attorney in the Pacific Northwest and has been recognized by Intellectual Asset Magazine as one of the World's Top 300 Intellectual Property Strategists every year since 2010. He lives in Oregon with his wife and two-year-old daughter.

When did you first start writing?
I can remember writing as far back as middle school. It’s something I have always enjoyed doing. One of the first poems I ever wrote was about my older brother and his basketball playing abilities. I still remember the opening lines and I wrote them nearly 30-years ago as a kid:

I’m Joe the King of Basketball,
I’m the king of the basketball court.
All my shots are always on target,
None of them are ever short.

I didn’t say it was any good! I don’t remember any more than that. To be honest, I’m not sure how I even remember those lines.
The point is writing has been something I have always enjoyed doing and something I have always admired in other people. Story telling is a beautiful gift. I love learning to hone the craft.
What do your fans mean to you?
I was thrilled when my book became a #1 Bestseller on Amazon for short stories. That was really exciting and only due to the love and support of my readers. Even more than that, however, are the personal stories that readers share with me. I feel blessed to be connecting with readers on a personal level. I'll share one of the most touching.

There was one lovely woman, though, that had some feedback that really touched me. In her review itself she had wonderful things to say, commenting how she wanted to give the book 10 stars instead of 5 and how people will want to read my book again and again; but she contacted me directly as well. She told me that her husband was an Air Force helicopter pilot who died in 2012 in a mid-air collision. She had spoken to him one last time less than 2 hours before he passed away. His last words to her, she says, were nearly identical to the last words in my book—“I’m yours, and that’s it. Forever.”  She was so moved and just cried. She told me that she could never thank me enough for bringing her that experience in my writing. Simply beautiful.
Read more of this interview.

Where to find Dan Buri online 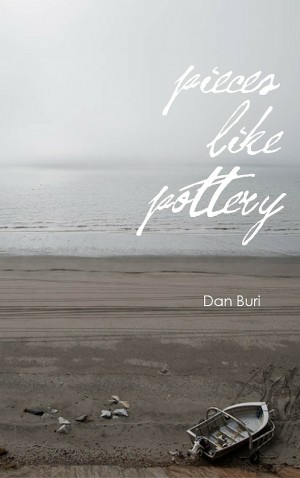 ****4.5 out 5 Stars with 97 reviews on Amazon**** Pieces Like Pottery is a powerful examination of the sorrows of life, the strength of character, the steadfast of courage, and the resiliency of love requisite to find redemption. Charged with merciful insight into the trials of life, reminding us of the sorrows we all encounter and the kindness we receive, oftentimes from the unlikeliest of place

You have subscribed to alerts for Dan Buri.

You have been added to Dan Buri's favorite list.

You can also sign-up to receive email notifications whenever Dan Buri releases a new book.