Diane Obbema, a 30-year veteran of the Jefferson County Sheriff’s Office in Colorado, specialized for 12 years as a detective investigating crimes against children in Colorado’s First Judicial District.

The first woman ever named Top Recruit in a Jefferson County Law Enforcement Academy class, Deputy Obbema worked several years on patrol before being selected to pioneer the DARE program in Jefferson County schools in 1990. She returned to patrol in 1995. Promoted to detective in 1998, Detective Obbema was assigned to the Crimes Against Children Unit where she investigated over 400 cases involving child victims of sexual abuse, physical abuse/neglect, and homicide.

Det. Obbema earned wide recognition for her notable work in several high-profile crimes. She was a key investigator of the Columbine High School shootings, earning commendations for her work to determine exact events in the school library where 10 children were murdered and many others severely injured or traumatized. Her central role in the Evergreen “Rebirthing” Homicide case - where a child was killed by her therapists - received national and international coverage.

An accomplished speaker and presenter, Det. Obbema has instructed criminology students at Regis University, child welfare professionals, and law enforcement officers throughout Colorado. Her topics include The Mind of the Child Molester, Child Forensic Interviews, and Interview and Interrogation. Det. Obbema has served as a Crime Scene Technician and Field Training Instructor. For 14 years she has been a P.O.S.T. Certified Law Enforcement Academy Instructor and subject matter expert in Child Abuse Investigation.

Det. Obbema was honored as the 2006 Employee of the Year for her excellence in directing the department’s Sex Offender Registry. Her interrogation skills were used in obtaining confessions from suspects in the nation’s first multi-jurisdictional Internet Predator Sting. Her testimony before the Colorado Senate helped tighten sex offender registration laws.

Det. Obbema has volunteered as an Investigative Associate with International Justice Missions, a human rights agency that intervenes on behalf of child victims of sex trafficking.

Det. Obbema retired in 2015 and is available to speak on child sexual abuse prevention and investigation. She has authored the new book Protecting Innocence: How to Discuss Sexual Safety with Children (Highdale Press; 2015) to help parents understand how children become vulnerable to offenders; and the parent-child conversations which will educate and build a trust that deters potential victimization. Contact Diane Obbema at www.ProtectingInnocence.com

Where to find Diane Obbema online 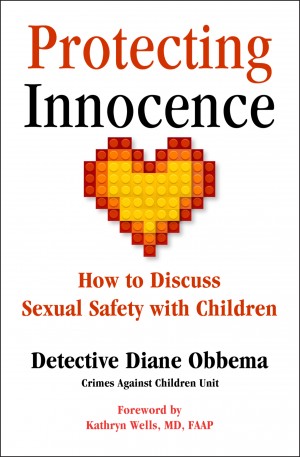 Protecting Innocence: How to Discuss Sexual Safety with Children by Diane Obbema
Price: $7.99 USD. Words: 32,500. Language: English. Published: January 30, 2015. Categories: Nonfiction » Parenting » Childhood psychology, Nonfiction » Relationships & Family » Child abuse
Learn how to prepare children to be safe from sexual abuse without frightening them or damaging their innocence. Det. Diane Obbema shares critical choices parents can make to fortify protective boundaries. Discover 4 vital parent-child conversations that build a child's ability to detect and respond to danger; and builds a trust between parent and child that no molester can easily break.

You have subscribed to alerts for Diane Obbema.

You have been added to Diane Obbema's favorite list.

You can also sign-up to receive email notifications whenever Diane Obbema releases a new book.