Paul Anderson lives in Adelaide, South Australia. He is a general surgeon who specialised in upper gastrointestinal and hepatobiliary surgery. He has also been one of the pioneers of laparoscopic bariatric surgery in Australia. He was born in Rotorua, New Zealand and like many Kiwi boys had a love affair with rugby representing his country as a junior All Black. He started his tertiary education at Waikato University in Hamilton before furthering studies in Scotland, California and South Africa. The passion for writing has always been present and is latently manifest thanks to the encouragement and direction of many friends. There is a sequel to ‘Does It Hurt To Die’ being written: ‘Old Lovers Dont Die’. which has just been published by Austin Macauley.A sizzling romance -Love Cuts Deeper than a Sharp Scalpel
He is currently Chairman of Specialists without Borders, which is a not-for-profit organisation taking medical education and training into developing countries.

What are you working on next?
the sequel to Does It Hurt to Die has been completed. This book will be the second in a quadrilogy called Do You Want to Die and may well be out before Christmas 2013. Also in the pipeline is a romance novel titled A Complicated Summer Love. Children's short stories are being assembled centered on a character Herbert the Galah
Who are your favorite authors?
Dan Brown/Steig Larsson/Wilbur Smith/Michael Crichton/Jeffrey Archer/Matthew Reilly/Patricia Cornwall/Lloyd Jones
Read more of this interview. 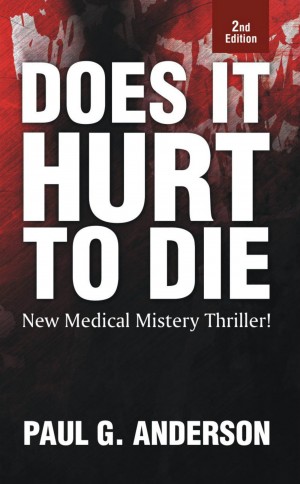 Does It Hurt To Die by Paul G. Anderson
You set the price! Words: 105,820. Language: English. Published: April 27, 2012. Categories: Fiction » Adventure » General, Fiction » Mystery & detective » Historical
Dr Iannie de Villier’s, a well-known liver transplant surgeon avoids death,in a terrorist attack but two weeks later, while recovering at home he is mysteriously murdered.Sixteen years later his son returns from Australia to discover that his father was involved in the murky world of apartheid , and a secret germ warfare programme, targeting people of colour.

You have subscribed to alerts for Paul G. Anderson.

You have been added to Paul G. Anderson's favorite list.

You can also sign-up to receive email notifications whenever Paul G. Anderson releases a new book.