Don took up riding as an 18-year-old training point-to-pointers, which is relatively late in life, but has been a passionate rider in all disciplines ever since. On his first day at the racing yard, he had his first lesson on his first ever ride. This lesson was one sentence long: just as he was approaching the gallops, he was told, “If you get into trouble, stand up in the saddle.” That was sound advice at the time! Later that day, he had his second point-to-point lesson: jumping. The advice was given AFTER his first jump, which ended up with Don’s face meeting the horse’s head over the jump, resulting in a bloodied nose and broken tooth. The advice was: “Oh, and put your head to one side.”
Don is a single parent to his 13-year-old daughter Molly and his 22-year-old son Calum. Molly is a very talented rider and already knows she wants to be an international competitor in dressage! Calum loves a different kind of horsepower… cars!
Don can be contacted by e-mail: don.campbell@thenakedrider.com

Where to find Don Campbell online 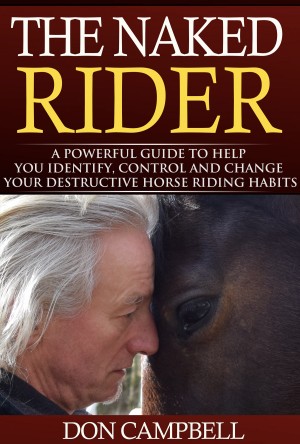 You have subscribed to alerts for Don Campbell.

You have been added to Don Campbell's favorite list.

You can also sign-up to receive email notifications whenever Don Campbell releases a new book.