Tina Frisco is an author, singer-songwriter, RN, activist, and student of shamanism. Born in Pennsylvania USA, she attended nursing school in New York and lives in California. She began writing as a young child and received her first guitar at age 14, which launched her passion for music and songwriting. She has performed publicly in many different venues. Her publishing history includes book reviews; essays; articles in the field of medicine; her début novel, PLATEAU; her children's book, GABBY AND THE QUADS; and her latest novel, VAMPYRIE. She enjoys writing, reading, music, dancing, arts and crafts, exploring nature, and frequently getting lost in working crossword puzzles.

When all the December 21st 2012 doomsday documentaries hit the screen, Tina was compelled to write a novel of hope. Thus Plateau: Beyond the Trees, Beyond 2012 was born. The protagonist in PLATEAU is ​a 15-year-old tribal female who, through great adversity and while honoring the wisdom of her elders, discovers her strengths and destiny. Her will is ​ tested relentlessly, daring her to face her fears and trust blindly without fully knowing why she was born the Keeper of the Crystal Heart, the key to the Great Mosaic of Life. She ultimately comes face-to-face with herself in a battle that would shrink the will of the most intrepid warrior, unaware that ​realizing her destiny will irrevocably impact all beings on earth and beyond. Her people inject humor and wisdom throughout this tale of mystery and adventure. Will love prevail over fear? Millions are asking this question. PLATEAU offers hope with its underlying message: We must keep our hearts open and act from love instead of reacting from fear, we must practice gratitude and compassion within every moment and with every breath, so that we might help elevate the human species to a higher consciousness and facilitate both personal and global peace.

Tina was inspired to write GABBY AND THE QUADS when her niece had quadruplets. A child's moral compass develops early, and she wanted to write a book that was ethically as well as traditionally educational. Gabby is an only child who is about to become big sister to quadruplets! How will she handle this? Her parents decide on a unique approach to introduce her to and help her accept this awesome experience. Follow Gabby as she learns all about babies and the joy of loving.

Tina has always been fascinated by the myth of the vampire and often wondered if the phenomenon actually could exist. Her background in medicine led me to speculate about how this might have a basis in reality. If rooted in science, how might this myth come to life? The most likely answer would be as a physical disorder or disease. All this musing gave rise to her latest novel, VAMPYRIE: Origin of the Vampire. What if vampires were not the undead, but rather the dying? What if there were two factions among vampires: the sustained and the unsustainable? And what if those factions were at war with one another over the life of a young woman who promised them a future? VAMPYRIE brings the myth of the vampire into the realm of possibility. Phoebe Angelina Delaney is a reluctant genius and compassionate hothead. She finds herself in a pitch-dark underground and doesn’t remember how she got there. Did she drink too much alcohol and wander off in a stupor, or was she kidnapped by a malicious element determined to make her life a living hell? Sir Michael Alan David is a vampire – an enigma, charismatic and mysterious, who weaves in and out of Phoebe’s life. Does he intend to use his title as a ruse to draw her closer to an unearthly fate, or is he a cloak-and-dagger knight in shining armor? Too many secrets have been kept for too long. Phoebe must unravel the mystery in order to survive. Two major characters from the author’s first novel, PLATEAU, join forces with Phoebe to battle the demons in VAMPYRIE.

Where to find Tina Frisco online 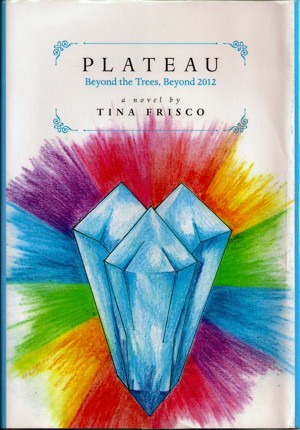 W’Hyani was born strong, willful, and the predestined Keeper of the Crystal Heart, the significance of which she is unaware. Her fortitude is tested unrelentingly. She comes face-to-face with herself in an ultimate battle that would shrink the will of the most intrepid warrior, unaware that the outcome will irrevocably impact all beings on earth and beyond.

You have subscribed to alerts for Tina Frisco.

You have been added to Tina Frisco's favorite list.

You can also sign-up to receive email notifications whenever Tina Frisco releases a new book.