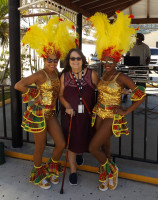 A lifelong reader, writer, and logophile, Evelyn Dunbar Webb is the recipient of numerous awards for her children’s stories, poetry, and essays. After more than four decades as a mother, business owner, English teacher, and workshop instructor, she returned to her first love—spinning tales—in 2016. When she is not writing, she spends her days reading, drawing, riding her tricycle, or gardening. A native of Connecticut now living in rural central Virginia, Evelyn shares a home with her husband, thousands of books (many of which are hand-me-downs), and the occasional grandchild.

Where did you grow up, and how did this influence your writing?
I grew up in the Hill section of New Haven, Connecticut, sharing a room with my two younger sisters on the second floor of a two-floor building. The neighborhood at the time was an eclectic mix of old style tenements and two-family houses down the street from Grace New Haven Hospital, now Yale New Haven Hospital. Our neighbors were as diverse as the buildings, from Romanian gypsies, Russian, and Polish to Irish, Italian, African American, and a dash of us with a mixed heritage. Sunday afternoons the neighborhood was alive with an overlapping aroma of ethnic specialties, such as kielbasa and cabbage, pasta with spicy sausage, roast beef, roast lamb, and black bean stew, accompanied by strains of favorite phonograph recordings of jazz, polkas, big band, and brass. In the summer, we watched the older men play bocce ball while the boys played kickball and girls played hopscotch or jumped rope. Winter snow provided opportunities to build igloos, fight snowball wars, and skate on the frozen pavement in the schoolyard across the street. Far from an idyllic life due to a prevalence of poverty, what we didn't have in terms of money or "stuff" we made up for with traditional values and respect for others. Sadly, as the 60's became the 70's, an influx of new attitudes and ideas - not all uplifting or healthy - the old neighborhood disappeared, swallowed up by Yale's expansion. We, like most of our neighbors, moved to other areas of the city or out of town altogether. In time, former friends lost touch. But whenever I dream or think about the "old days," visions of the Hill section arise, complete with sights, sounds, and smells, and it is this wealth that breathes life into all that I write, be it scene or story, play or poem.
When did you first start writing?
I began writing as soon as I could hold a pencil, at about 4 years of age. My sisters and I were blessed with parents who encouraged reading and creative activities early in life. My first attempts at storytelling mostly dealt with animals and characters from the books I read. By age 7, I began developing short stories with illustrations, not only adapting other folks' stories but also creating new tales filled with colorful imaginings drawn from relatives and strangers alike.
Read more of this interview.

Where to find Evelyn Dunbar-Webb online 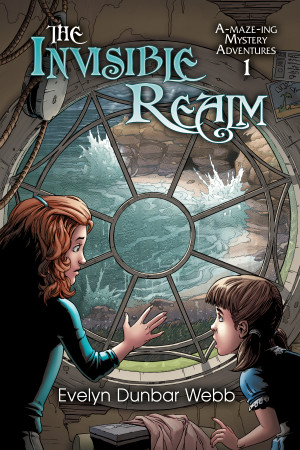 The Invisible Realm by Evelyn Dunbar-Webb
Series: A-maze-ing Mystery Adventures. Price: $7.99 USD. Words: 30,580. Language: English. Published: January 2, 2019. Categories: Fiction » Children’s books » Family / Stepfamilies, Fiction » Adventure » Action
Stepsisters Hattie and Dacey embark on a treasure hunt and soon discover a hidden world where they encounter fairy tale characters, struggle through a maze filled with intrigue and danger, attempt to save their new friends from the evil that threatens their realm, and in the process, learn what it means to be “real” sisters.

You have subscribed to alerts for Evelyn Dunbar-Webb.

You have been added to Evelyn Dunbar-Webb's favorite list.

You can also sign-up to receive email notifications whenever Evelyn Dunbar-Webb releases a new book.