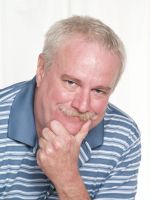 Born in Springfield, Ohio, Elgon Williams grew up on a farm near the town of South Charleston and the village of Selma in rural southeastern Clark County. "That was about two miles from nowhere and between cornfields," he states in one of his autobiographical pieces.

"To the great relief of my parents, teachers and me, I graduated from Shawnee High School in 1974." In the fall of that year he began studies at Purdue University in West Lafayette, Indiana, eventually receiving a BA in Humanities with a major in Mass Communication. In the summer of '79, in the midst of a major economic crisis and the height of the gas shortages, he hitched a trailer to a gas-guzzling '76 Monte Carlo and hauled all his worldly belongings to Austin where he spent a couple of years studying Marketing Administration at the University of Texas.

"By the way, the only place I had trouble finding gas on my journey from Indiana to Texas was in central Texas. Out of gas, meaning the needle on my gas gauge was bent around the nub next to the letter 'E', I pulled into an Exxon station, ignoring the sign that stated 'Gas For Locals Only'. After explaining that my car was not going to make it out of town and as a result I would become a local, the station's owner allowed me to fill my tank. My guess is he didn't really want a Yankee like me as a neighbor. Who would? I was obviously a trouble maker."

During college he sold brass peephole installations door-to-door to make some extra spending money. "It may not sound like a lucrative enterprise but I was very successful at it. First, you know if you have a qualified customer before you knock on the door. Second, it's all in the presentation. The closing was automatic."

As a college-age kid with long hair and a scraggly beard, he knocked on a prospective client's door. When the door opened there he was holding a power drill in one hand and a box of brass peepholes in the other, asking, "Wouldn't you love to know who's at your door the next time someone comes calling? I pulled in a couple of hundred dollars a week, which was really good money back then."

After receiving his degree from UT Austin, he sold vacuum cleaners for a while, though not with anything like the success of brass peephole installations. He relocated to the Tampa Bay area where he worked for a small advertising agency by day and a grocery store by night. "Seeing no career potential in what I was doing, I joined the US Air Force in early 1983."

For forty-seven glorious, albeit chilly, weeks he studied Chinese Mandarin at the Defense Language Institute at the Presidio of Monterey in California. The only reason he could afford to be in such a picturesque place was that the government was funding his education, room and board. Upon completion of his training, he lived and worked in Asia until the fall 1986.

Upon returning to the US, Williams sold computer software for a while as a telemarketer before beginning a career in retail management. Between 1987 and 2012 he worked for several major retailers. Periodically, he also served as a vendor advocate for a national marketing firm representing many computer technology and software companies in retail outlets. The corporate offices were located in Las Vegas. So, twice a year he had to fly there for training. "Tough life, I know, but you do what you gotta do."

Giving training assistance to sales people and customer focused product demonstrations was part of his job. He stayed current on technology and submitted articles and reviews for many of the products he represented. Additionally, he provided presentations to local computer user groups and offered personal computer training for MS Windows based computers. "I currently work on the Mac platform so I can spend more time using my computer than maintaining it."

The computer technician and consultant phase of his life began in 1994 with the fateful decision between Mac and PC. His ex-wife to whom he was still married at the time, decided there was more software for PC's. "When we bought the computer for the kids - the one I used most of the time - it had Windows 3.1 installed. After playing solitaire a gazillion times, I decided I probably should figure out something more productive to do with it." Converting his great American novel-in-progress to a digital format began and after a few years, it was ready to edit and revise. In 2002, a small Connecticut based publisher printed One Over X - From The Inside To the Closer. Two years later Game of Hangman followed. In 2007, Williams added Curse of the Spectre to his portfolio.

"Although my early writing was categorized as sci-fi and fantasy, it is difficult to fit my writing into any genre." A number of his stories are historical fiction loosely based on childhood. Some non-fiction pieces are based on life with his three children who are now adult. Lately, He has been experimenting with general fiction, mystery and romance stories set in places he has lived around the country and the world. His most recent shorter pieces have an urban fantasy theme.

Describe your desk
Functional for writing but little else. It's large enough for me to spread out my things should I need to. I have a stand for my MacBook the raises it to eye level and I have a keyboard plugged into the USB hub. (I don't like typing on a laptop keyboard). That's where I create things.
Where did you grow up, and how did this influence your writing?
I grew up on a farm in west central Ohio in southeastern Clark County. There was a woods behind my house and I spent a lot of time there. I was the last child and the only boy. Both my sisters were much older and didn't care to play with me all that often. There weren't a lot of kid who lived near me. So, I was left to my own devices for entertainment. Good thing I had an imagination, otherwise I would have been bored a lot. Somehow my imagination has survived growing up. That's why I write.
Read more of this interview.

Where to find Elgon Williams online

You have subscribed to alerts for Elgon Williams.

You have been added to Elgon Williams's favorite list.

You can also sign-up to receive email notifications whenever Elgon Williams releases a new book.