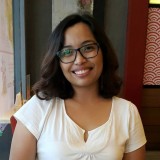 Eliza Victoria is the author of several books including the Philippine National Book Award-winning Dwellers (2014), the novel Wounded Little Gods (2016), and the graphic novel After Lambana (2016, a collaboration with Mervin Malonzo). Her fiction and poetry have appeared in several online and print publications, including Daily Science Fiction, Stone Telling, Room Magazine, Story Quarterly, The Pedestal Magazine, High Chair, and the Philippine Speculative Fiction anthologies. Her work has won prizes in the Philippines’ top literary awards, including the Carlos Palanca Memorial Awards for Literature and the Philippines Free Press Literary Awards. She has also been nominated for the Philippines’ National Children’s Book Awards (Jeremy’s Magic Well). A story of hers (“Dan’s Dreams”) is included in The Year’s Best YA Speculative Fiction 2013, featuring stories from authors such as Ken Liu, Lavie Tidhar, Sofia Samatar, Nnedi Okorafor, and Neil Gaiman.

Where to find Eliza Victoria online

You have subscribed to Smashwords Alerts new release notifications for Eliza Victoria.

You have been added to Eliza Victoria's favorite list.

You can also sign-up to receive email notifications whenever Eliza Victoria releases a new book.