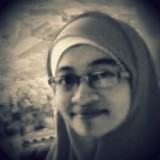 Fajriy Arunna is my name on the Internet.
I'm a senior college student and now working on my thesis.
I was born and raised and now live in Gresik, Indonesia.
I love reading since a couple of years ago. My favourites are science fiction, fantasy, general YA novels, and general self-help books.
Now I'm working on my first sci-fi novel and some ideas on fantasy.

You can also sign-up to receive email notifications whenever Fajriy Arunna releases a new book.