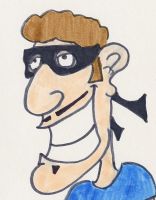 Flabby Hoffman is a prolific renaissance man. He has released 3 albums (including a new triple disc/4 hour long masterpiece) with his 50 member strong Flabby Hoffman Trio, written the 5th longest book in the English language, produces a weekly hour long variety TV series in Chicago, had a long running radio series at full time online radio station, is one of the largest independent promoters of live shows on the Chicago rock and comedy circuits and performs regularly both with his band and as a professional host for a wide variety of shows…all in his spare time.

His profound expressiveness and diverse productions have trail blazed their way across the Chicago scene for 10 years. In that time his efforts as a local TV producer, live nightclub show booker on the Chicago rock and comedy circuit and various original productions have given voice to thousands of local Chicago artists from every creative discipline always with an eye towards encouraging every to follow their organic creative instincts and never restricting their vision or editing their content. Flabby's credo is: To support and encourage the growth of what's good in people.

The "Flabby" character was born almost a decade ago when some friends suggested a thematic persona idea as the centerpiece for a Chicago TV series that had roots in humor, politics and performance would be a fun and powerful idea. That TV series, called Flabby Hoffman, made its debut in 2004 at CAN-TV, Chicago Cable Channel 19 and has appeared every Thursday night from 11:30pm to 12:30am ever since. In that time 100's of bands, solo performers, dance troupes, comedians, artisans and various creative minded folks have made their way across the TV show. The bulk of the work, has fallen to Flabby who has for a number of years done most of the camera work, editing, line producing, writing and occasional performing all by himself for a series that has to air 48 original episodes every calendar year with each one being 58 minutes in length. That is three times more airtime than a network TV series whose budgets allow for them to sometimes have as many as 100 people or more working on that production. You wont see a lot of glitz or polish on his show, but Flabby has created an opportunity for people to get the ball rolling in a truly open environment.

In addition to the TV series, Flabby has become one of the busiest local promoters on the Chicago scene. With over 500 shows booked at nearly every club on the Chicago rock circuit and now booking comedy shows too, it offers great easy access for performers to get their foot in the door at a wide variety of venues in an effort to cut through the red tape for people and defeat that old Catch 22 of not being able to get gigs before having a track record at clubs, and not being able to get a track record at clubs cause they can't get booked. Flabby has multiple shows he's booked at such noted Chicago clubs as the Double Door, Empty Bottle, Martyrs, Abbey Pub, Elbo Room, Bottom Lounge and others. He also pioneered a fun concept called Flabby Fest. Held at Abbey Pub, there have now been three Flabby Fests which were designed as weekend long events using two stages to put on an indoor festival. Flabby Fest 3 included 40 bands, solo performers, 3 hours worth of comedy…all taped to gain footage for the Flabby TV series.

Most important to Flabby however is his own creative pursuits. Having written close to 2500 songs in his life, his connection to the artistic impulse is strong. His band, The Flabby Hoffman Trio (which features anywhere from 5 to a dozen or more members for each show) has played over 150 gigs including multiple stints all the top venues in their hometown of Chicago and a wide variety of regional festivals. They have just released their 3rd album entitled "Coup De Ta-Ta's" which very well could be one of the longest recorded original music albums in rock history (4 hours over 3 discs with 50 new songs). The album includes contributions from 50 immensely gifted local musicians who make up the extended family that is the Flabby Hoffman Trio.

But all this is just the tip of the iceberg in regards to the output of this uncommon and profound visionary. For if "art" is a representation of the means of expanding our humanity, than Flabby Hoffman is undeniably one of the chief exponents of that struggle.
At the same time that Flabby was creating this album, he was also writing a book of mind boggling scope and intensity. Called "The Avant Guardian," this tome is no less than 730,000 words long which makes it the 5th longest book in the English language. The Avant Guardian attempts to use satire and humor to make it a little easier for people to confront some of the challenges facing our culture in a more direct and honest way than we collectively have been under the premise that the modern day revolution should seek to empower what's good in people by informing and inspiring them to engage more emphatically with the world around them instead of just sitting around and living life vicariously.

Because for Flabby it all boils down to this. We can create a better world to live in and it is up to each and every one of us to do so. And by inspiring others to seek what is best inside them and dig deep to create a profound sense of self that is informed and considerate without any thought of reward other than to reflect upon a life well lived. None of Flabby's pursuits pay more that it costs him to reach his dream. Thus far the massive hours required to keep all this going in the right direction have been so demanding that they have brought him quite literally to the edge of survival, but sometimes extraordinary times call for immense sacrifice. But Flabby sees his path of self sacrifice as an obligation to help turn things around as our culture deteriorates into a paradigm of less depth and inspiration. Simply put, he views committing one's life towards the preservation of our endangered humanity is nothing short of a labor of love.

Where to find Flabby Hoffman online 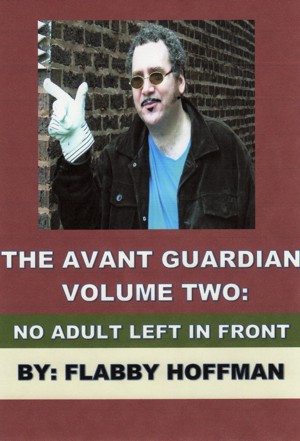 The Avant Guardian - Volume Two: No Adult Left In Front by Flabby Hoffman
Price: $5.99 USD. Words: 379,210. Language: English. Published: February 28, 2013. Categories: Essay » Political
Flabby Hoffman, Chicago's most prolific underground exponent of music, live shows, televised variety and all out wackiness has done it again. This book is another relentless bitch slap at the status quo with his unique brand of uncompromising satire and dark humor. The corporations of this world might still win out and steal our souls for keeps, but at least someone is putting up a fight. 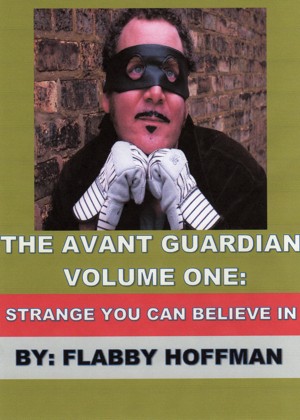 The Avant Guardian - Volume One: Strange You Can Believe In by Flabby Hoffman
Price: $5.99 USD. Words: 394,500. Language: English. Published: February 28, 2013. Categories: Essay » Political
Anthology of essays, musings and satires regarding politics, society and the absurdity of it all by Chicago's long time leading underground activist, musician, TV/radio producer and live venue promoter.

You have subscribed to alerts for Flabby Hoffman.

You have been added to Flabby Hoffman's favorite list.

You can also sign-up to receive email notifications whenever Flabby Hoffman releases a new book.