After growing up on a farm in eastern Colorado, Lee went to Colorado State University (CSU) and spent a summer and fall working for the Department of Fish and Game in Alaska. He married Barbara in Anchorage in 1961 and then joined the Air Force where he earned a commission as second lieutenant. Instead of being assigned to pilot training, as promised, he was trained to be a navigator and bombardier. After two and a half years training he ended up as a nuclear qualified
crew member on a B-52 alert crew. His ambitions to become a pilot were frustrated as he sat on alert in a concrete bunker facing off with the Russians during the Cold War.

After two years of sitting alert and flying practice bombing missions on his days off, Lee found a crack in the rigid Strategic Air Command rules and procedures. He managed to get a reassignment to Air Force Pilot Training. It was a back door maneuver but a fair swap with the air force! They would train him to fly as a pilot and he would serve in Southeast Asia where the Vietnamese War was being fought. After receiving his pilot wings in 1967 his subsequent tours as a pilot
included three years flying in South East Asia during the Vietnam conflict. He was a 28 year old co-pilot when he flew his first load of freight into Vietnam.

Little did he imagine that three years later he would depart the war zone not only a seasoned transport pilot but an instructor pilot flying reconnaissance missions in northern Laos—for the CIA. It was during his three years in Southeast Asia that Lee’s flying adventures provided him with the wealth of material to write his book. The escapades of the younger, unmarried lieutenants provided the material for the womanizing and frisky off duty revelations experienced by his fictional character Eddie. During those years Lee's wife Barbara lived in Tachikawa, Japan, and gave birth to their daughter Cindy.

After returning to the United States, Lee resigned his military commission and flew for various organizations: air ambulance, air freight, Ports of Call Travel Club, and at age sixty retired as a Captain from United Airlines. After several years in retirement he resumed his career and flew for three years doing precision aerial mapping projects for various government agencies.

Lee Croissant is now retired from flying and enjoying his rural home in Colorado with Barbara, where he has spent many long hours writing and illustrating "Flyboys."

Where to find Lee Croissant online 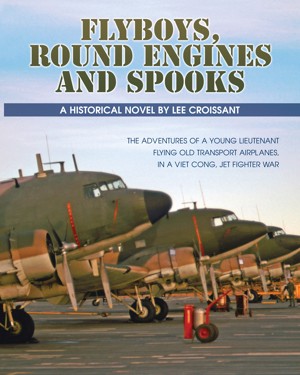 Flyboys, Round Engines and Spooks by Lee Croissant
Price: $3.99 USD. Words: 263,320. Language: English. Published: October 8, 2012. Categories: Fiction » Adventure » War & military adventure, Fiction » Historical » USA
Fasten your seat belts and get ready to fly with Lieutenant Eddie Werner as he ends up in Southeast Asia flying old World War II era transport aircraft. Powered by radial (round) piston engines and spinning propellers it returns the reader to World War II era flying but in a Viet Cong jet fighter war. Based on the author's real life experiences. Only the names and stories are fictional.

You have subscribed to alerts for Lee Croissant.

You have been added to Lee Croissant's favorite list.

You can also sign-up to receive email notifications whenever Lee Croissant releases a new book.