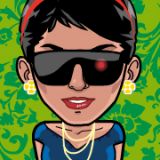 I run Adarna SF: a speculative fiction blog for the ebook revolution. We review ebooks in science fiction, fantasy, and horror. Our focus is on ebooks from independent publishers and self-published authors. Stop by to find your next neat ebook read!

Where to find Caroline Cryonic online

You have subscribed to alerts for Caroline Cryonic.

You have been added to Caroline Cryonic's favorite list.

You can also sign-up to receive email notifications whenever Caroline Cryonic releases a new book.