Graham Keeler was born in Hertfordshire and grew up in neighbouring Essex. He studied Physics at Queen Mary College, London, and graduated in 1965 with First Class Honours, continuing to a PhD in 1969. He lectured in Physics at Salford University from 1970, developing an interest in the computational side of the subject. He retired from full-time teaching in 2002, but continued to work part-time at the University until 2012.

His interests include badminton and tennis, which he still plays on a regular basis, representing local clubs in league matches. He also enjoys playing bridge, and flying. He has a private pilot’s licence and has toured in the UK and abroad, making his longest journey in 2002, to Marrakesh. He is fascinated by anything to do with astrophysics and space travel, and he applied to participate in the UK scientific contribution to the American space programme.

He has written, co-authored and edited seven books on various aspects of microcomputers and the development of physics software simulations. Stowaway to the Stars is his first science fiction novel.

Where to find Graham Keeler online 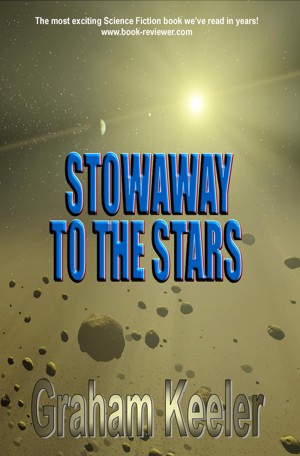 Stowaway To The Stars by Graham Keeler
Price: $4.95 USD. Words: 92,620. Language: English. Published: October 30, 2012 by Mirador Publishing. Categories: Fiction » Science fiction » Space opera, Fiction » Science fiction » Adventure
Larry is an undercover agent for the Interstellar Exploration Programme, when he stumbles on a covert operation by Zilon, a ruthless member of the Galactic Union. He finds himself framed by the Ziloni and a fugitive from the Union. Karen is seeking the man responsible for the death of her sister. But one simple case of mistaken identity, and a reckless decision suddenly sees her life in turmoil.

You have subscribed to alerts for Graham Keeler.

You have been added to Graham Keeler's favorite list.

You can also sign-up to receive email notifications whenever Graham Keeler releases a new book.