Author Peter Blakeborough was born in New Zealand in 1937, the eighth of eleven children.
In 1954, while working on farms and in factories, he learned to fly with the Auckland Aero Club at Mangere in South Auckland. The training aircraft were de Havilland Tiger Moth, open cockpit, biplanes. In 1957 and 1958 he completed several flying tours around New Zealand, sharing costs with his passengers.
He worked as an electrical linesman and furniture salesman at Matamata and became a foundation member of the Piako Gliding Club, made the transition to glider flying, became a volunteer tow-pilot, flying instructor and chief flying instructor. He managed the fund-raising project that enabled the club to double its fleet size with the purchase of a £2,000 high-performance, single-seat sailplane, at the time equivalent in value to an expensive house.
Next, the author worked as an agricultural aviation loader-driver in many parts of New Zealand before going to Australia where he became a door-to-door encyclopaedia salesman and sales manager in five states across the country.
Back in Auckland in 1964, he continued his driving career with buses, trucks and taxis. At that time, he became interested in coins, stamps and medals and started a business for collectors, dealing in coins and associated books, importing and exporting.
His first non-fiction book, The Coinage of New Zealand, 1840-1967, was published in 1966 by Minerva. He was the founding editor of The New Zealand Coin Journal from 1966-1967, distributed nationally and internationally.
The author joined the National Party in 1970 and was the party candidate for Onehunga in the 1972 general election. The next year he left National to form the New Zealand Liberal Party and was its leader in the 1975 general election campaign. The party advocated adoption of a written constitution, proportional representation and economic reforms like those later taken up by Bob Jones’s New Zealand Party and the third Labour Government. Peter Blakeborough joined Jones in the New Zealand Party and was a candidate again in 1984.
Meanwhile, the author operated a taxi business in South Auckland where he is remembered as the person responsible for launching the first taxi-van service in New Zealand despite determined official opposition.
Some overseas travel followed the sale of the taxi business and the author turned to tour driving. That led to the establishment of Panorama Tours and a unique three-hourly city circuit tour with pick-ups and drop-offs at hotels every hour. He also escorted tours to Australia, Malaysia and along the Silk Road from China to Pakistan.
In 2001 and again in 2003, he went to America and drove long-distance trucks through forty states. From that experience he later wrote and published Highway America - the adventures of a Kiwi truck driver.
Peter Blakeborough continued flying until 1982. He flew more than fifty types of aircraft. He is currently a flight simulator enthusiast, has been a yachtsman and has completed numerous walks in remote areas of New Zealand.
In 2009 he launched Gypsy Books and published the Asker Trilogy of Australian and New Zealand historical fiction; Nathaniel’s Bloodline, Murder at Wairere and A Twist of Fate. Then followed Highway America – the adventures of a Kiwi truck driver – in 2010. His most recent book is The New Zealand Tour Commentary – a handbook for tour drivers and guides. That book has been revised and reprinted numerous times.
After going into semi-retirement, Peter Blakeborough and his motor-home Wandering Wheels, were often seen at markets and motor-home rallies, or on visits to bookshops and libraries. He was the founding chairman of Waikato Writers, a branch of the New Zealand Society of Authors.
Peter Blakeborough's Blog comments and posts on issues of the day and including publishing, aviation, transport, country music, crime, politics and news from around New Zealand and the world. For Peter's Blog go to: http://peterblakeboroughsblog.blogspot.com/

What is your e-reading device of choice?
A Kindle while traveling. It takes up so little space and can hold such a lot of reading. At home I read on Kindle for PC. I just find it convenient when I spend so much of my time on the computer.
What book marketing techniques have been most effective for you?
When I had print books for sale I took them direct to bookstores and libraries. The books really just sold themselves with almost no paid advertising. But I was fortunate to receive a lot of free publicity from newspapers, radio and television interviews during my travels. Speaking at a variety of meetings about my books and writing also generated lots of sales.
Read more of this interview.

Where to find Peter Blakeborough online 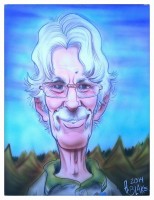 Around the World in Eighty Blogs
Price: $1.99 USD.

The Asker Trilogy by Peter Blakeborough 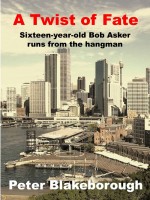 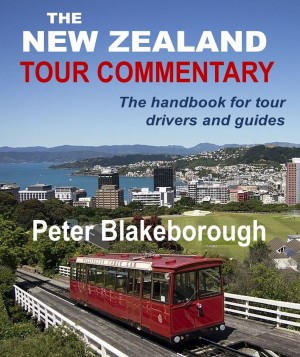 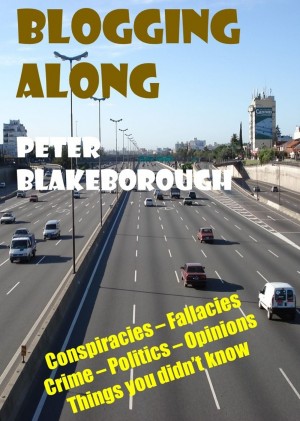 Blogging Along by Peter Blakeborough
Series: The Blogger Series. Price: $1.99 USD. Words: 32,130. Language: English. Published: February 2, 2015. Categories: Nonfiction » General reference » Bibliographies & indices
Blogging Along has been compiled from the author’s blog, which has readers in more than 120 countries. This companion book to Around the World in Eighty Blogs, published in 2013, contains opinions, information, and revelations on a wide range of topics, some obscure, some controversial. 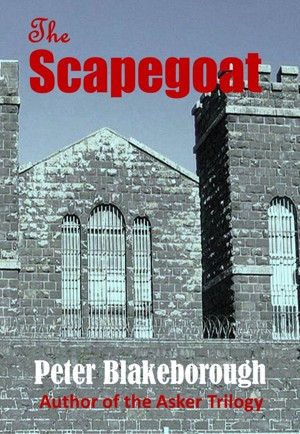 The Scapegoat by Peter Blakeborough
Series: The Asker Trilogy, Book 2. Price: $6.99 USD. Words: 127,290. Language: English. Published: February 17, 2014. Categories: Fiction » Historical » Australia & New Zealand
Newlyweds Cedric and Doris Asker sail for New Zealand aboard the Elingamite. But they become separated when the ship sinks near the Three Kings Islands with the loss of many lives. The Askers strive to overcome tragedy, disaster, business failure, and a wrongful murder conviction. 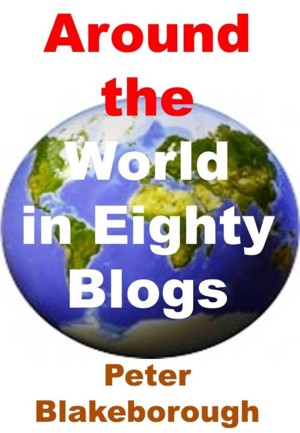 Around the World in Eighty Blogs by Peter Blakeborough
Series: The Blogger Series. Price: $1.99 USD. Words: 50,400. Language: English. Published: September 12, 2013. Categories: Nonfiction » Travel » Specialties & interests, Nonfiction » Business & Economics » New business enterprises
Around the World in Eighty Blogs is a selection of the best earlier posts from Peter Blakeborough's Blog. The topics are wide-ranging, some serious, some humorous, and come from many different parts of the world. This is Peter Blakeborough's eighth book and many of the posts express opinions that may be controversial and give rise to vigorous debate. The author welcomes comments and reviews. 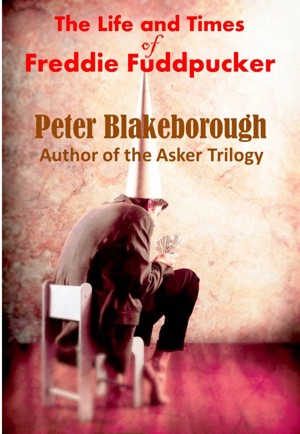 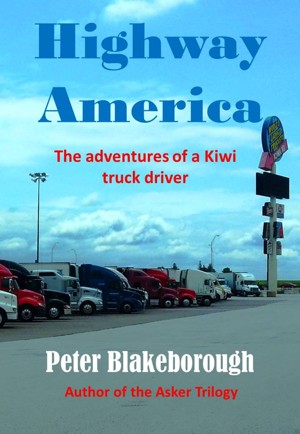 Highway America - The Life of a Trucker by Peter Blakeborough
Price: $7.99 USD. Words: 59,520. Language: English. Published: November 11, 2011. Categories: Nonfiction » Travel » Road travel, Nonfiction » Transportation » Automotive / Trucks
Highway America is a must-read trucking and travel guide for anyone wanting to drive across America or work as an interstate trucker. Peter Blakeborough, a native of New Zealand, recounts his life on the road with humor and graphic detail. 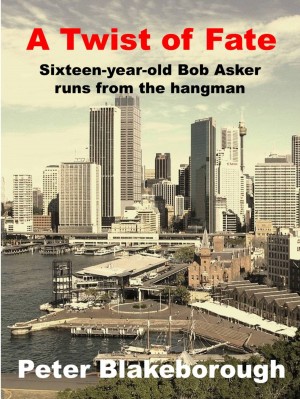 Bob Asker is a sixteen-year-old when his girlfriend is murdered by cop’s son, Bryce Russell. But Asker is charged with the crime and a rigged jury decides that he must hang. The prison van carrying Asker to Mount Eden prison crashes at the infamous ‘Collision Crossroads’ near Auckland, New Zealand, and the condemned youth runs for his life. 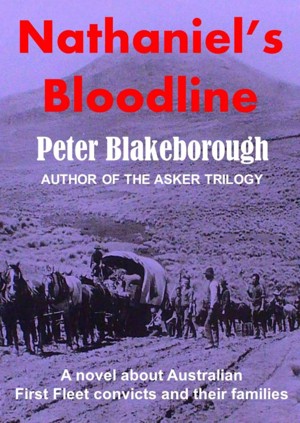 A novel about Australian First Fleet convicts and their families. Nathaniel's Bloodline is based on historical events in the earliest days of convict settlement in New South Wales. It is also about fair-dinkum Aussie battlers chasing their dreams, and running from gangsters and corrupt law men. Fast moving, gripping action with lots of twists and turns.

You have subscribed to alerts for Peter Blakeborough.

You have been added to Peter Blakeborough's favorite list.

You can also sign-up to receive email notifications whenever Peter Blakeborough releases a new book.