H.B. Koplowitz is a journalist and writer who lives in Florida.

He was born in Carbondale, Illinois, and attended Southern Illinois University, where he edited the campus newspaper and started a campus magazine.

After graduating with a degree in journalism in 1977, he worked at an alternative weekly in Springfield, Illinois, then returned to Carbondale to report for his hometown daily newspaper. He was living in Buckminster Fuller's dome home when he self-published "Carbondale After Dark" in 1982.

He became a regional correspondent for the "St. Louis Post-Dispatch" and earned a master's degree in Public Affairs Reporting at the University of Illinois-Springfield, where he interned as a statehouse reporter. He became a public information officer for a state agency and ghostwrote a book for an Illinois governor who did not go to prison.

In 1996 he moved to Los Angeles, where he became a columnist for an entertainment weekly, an editor at the legendary City News Service, and a teacher at a community college in South-Central Los Angeles, which inspired his second book, "Blackspanic College," self-published in 2009.

In 2012 he issued his first ebook, "Misadventures in Journalism," an anthology of New Journalism stories that examine the oxymoron of journalism ethics.

Where to find H.B. Koplowitz online 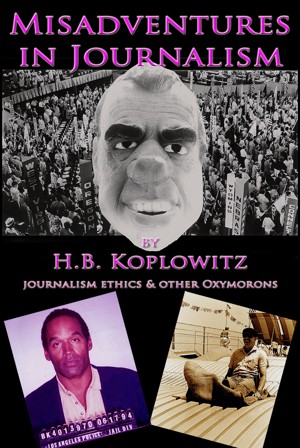 You have subscribed to alerts for H.B. Koplowitz.

You have been added to H.B. Koplowitz's favorite list.

You can also sign-up to receive email notifications whenever H.B. Koplowitz releases a new book.