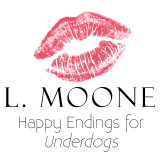 This pen name is no longer active. All of her books are being republished under L. Moone.

What's the story behind your latest book?
My latest release, At First Sight (just out on Amazon this week), is a short story about a couple who met online.The reader gets to follow Alice and Scott as they hope to meet for the first time on Christmas Day at Heathrow Airport. Both are heavily invested in the relationship and although they've seen pictures of each other, they never video chatted so there is still a bit of a risk that perhaps all is not as it seems.

I'm fascinated by the topic because at one point a decade ago, I was in Alice's position, stood at the airport more nervous than I'd ever been. Skype didn't exist yet, so my relationship with my then-boyfriend existed purely in black & white on a computer screen with the odd photograph sent back and forth, though it was all completely naive and innocent. Oh and I really love watching Catfish on MTV.
When did you first start writing?
If I had answered this last year, I would've said only recently and I would've been wrong.
The issue is, I'm very present-focused; the past doesn't mean much to me, so I've forgotten a lot of it.

I started writing pretty much the moment I learnt how to. I can recall one particular story which I wrote on copier paper using colour pencil (with illustrations) about an adventure I had with my butler(?!) and my pet velociraptor. Of course at the time I didn't know how to spell velociraptor (I barely do now, had to look it up), but that didn't stop me from writing the story and stapling the pages together like a little booklet. That's my first writing memory and after that I don't remember too much. I do believe there was a comic book collaboration with a cousin at one point but those memories are very vague. Then as a hormonal and fairly tragic teenager I remember dabbling in fanfiction so embarrassing I'm not willing to elaborate on it any further.
I didn't seriously write fiction until the summer of 2012, though I've tried my hand at blogging before and the odd (beginning of a) short story here or there.
Read more of this interview.

Where to find Hedonist Six online

You have subscribed to alerts for Hedonist Six.

You have been added to Hedonist Six's favorite list.

You can also sign-up to receive email notifications whenever Hedonist Six releases a new book.