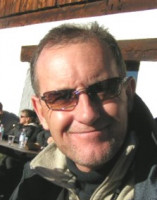 What makes me somewhat different to other writers, I had a massive stroke in 2011. It left me totally paralyzed on the entire right side of my body. But, that was then. I’m slowly, very slowly, recovering.

I've started with the launch through an intensive campaign of my books, which are called Rough Diamonds and SOME PICNIC!. I’ve been writing Rough Diamonds off and on since 1994 and I wrote SOME PICNIC! starting in about 2007 and launched it in 2011.

I was brought up on a coalmine in Durnacol, KwaZulu-Natal, South Africa as a young boy. This is where Rough Diamonds takes place. My Grandfather secretly kept the three uncut diamonds in a tin at the back of his cupboard, sadly he died, and my mother discovered them. I imagined how I would see the rough nature of the diamonds, and did an abstract visual for the cover of my book on the way they would have glinted in the bright sunlight. (Uncut diamonds can glint).

This is the evidence for Rough Diamonds:

Family ripped apart! A killer read...
In the sixties, this takes you to a mining village called Scallyclare in South Africa. There is deceit, evil, malice, negligence, blackmail, rape, murder. It starts when the three children's Grandfather gives them three uncut diamonds. Along with those, he gives them each a bracelet with their names engraved on. The diamonds and the bracelets become their blessings and their terrifying curses... This read is not for the gutless!

My books were going to fund my dream to return to motor racing, the ultimate goal to take part eventually in Le Mans 24 hours in France.  (I raced in South Africa in the seventies). I was (sadly) disqualified because of my severe stroke.

This is the greatest sports car race in the world. I attended the race in 2016, and it was phenomenal, mind-blowing! I was joining over half a million people watching the race. The racing car is planned to be emblazoned with the bright, in-mistakeable colours of the cover of Rough Diamonds, and the car will recognize my backers. I feel my book Rough Diamonds will make a great film and have started the ball rolling.

More about SOME PICNIC! further down.

Life was filled with thrilling moments. I spent a life in advertising and motor racing. I live in South Africa and I have been in Italy, France and Spain since March 2020, the start of the virus. Now, I live in Durban, next to Mitchell Park.

I have a business worldwide called Go-Organic. It started in 2003 in South Africa. I would like to give something back to the community with Go-Organic: feeding, cooking, restauranting and so much more… Start in Durban, spread around South Africa, and the world.

I'm an ex-racing driver, I've raced (past tense) in South Africa around the country in +-10 tracks. I took part in a race and rally tour over three days and it covered 2,000km.

I worked in the ad industry for many years (more than thirty) as a Creative Director then an Account Director. I have a couple of creative awards to my name and my teams'. I worked for Seychelles as a Marketing Director. (It has 115 islands).

As le Chef, I cook all things. I'm happy to eat mostly vegetarian dishes, and I also love meat. I have experience in picking, curing/salting olives, I can do cured meats (Charcuterie etc.), I have a liking for wine (I am a two year graduate from way back when...). I love mushrooms (I have a South African book).

Filled with a sense of adventure, widely travelled, a capable chef, raced and rallied cars, competed in three day long, gruelling canoe marathons, ran an ultra marathon of 87 kilometres (I pathetically baled after 36km....), and an average snow skier.

I used to be a part of an eight man wine tasting group, (called the Circle of Eight - there were eight of us), I've re-joined a wine-tasting scheme - we don't take the wines too seriously.

I'm currently an author and I've written two books. I've got a fiction book called 'Rough Diamonds' soon to be (I hope) a movie. I've a non-fiction book, named 'SOME PICNIC!', about a high-end picnic place, close to the Drakensberg, about our gourmet picnic business in South Africa. It talks about the activity which we ran from 2004 to 2007.

“Big sky.” Athena, my ex-wife, would say sometimes looking up at the vastness above.

“Wow, where did you get that from?” I’d asked the first time she said it.

“I felt it the first time I came to Africa. There’s just so much space and when you look out at the landscape it just seems to go on and on and on to the horizon and up into an endless sky.”

What a profound thing to say. This captures the feelings which we set out to achieve in Horizon's Gourmet Picnics.

My ex-wife suggested: "We need to get a quiet little place in the mountains, where we can chill out on weekends"; But the opposite happened - we ended up hectically working almost every day of the year on a picnic business with a difference.

It's a true story about Athena's and my business just outside Rosetta in the Midlands of KZN, South Africa. Follows the finding of the property (it wasn't what we had in mind...), setting up the concept for the Gourmet Picnic business, naming the place Horizons; (which says; as far as you can see; and sends a message "to stretch our guest's expectations). We sold the business as a going concern.

We started with glasses of free sherry on arrival. We walked them out of opposite end of the home, and they were impressed by the expansive views. Next, we sat them on specially made bean bags and low mini-tables or stylish chairs at a selection of tables. Then, we offered towellettes (heated in winter and chilled in summer) to rinse their hands. We would make sure that the bar would have kept their drinks flowing.

Every dish had a WOW factor. Our waitrons offered guests some snacky eats. Then, the sumptuous picnic would arrive packed in refined picnic basket containing half a dozen or so imaginative dishes. The guests ate with proper cutlery, from proper plates, drank from stylish glasses and used proper serviettes. There was plenty of ice to keep the ice buckets topped up and keep the wine chilled. After eating, they were welcome to sleep off their full bellies until they had a refreshed appetite for dessert. We found that Horizons was popular for couples that were getting engaged.

Please read them. Thanks. Ian

Where to find Ian Robinson online 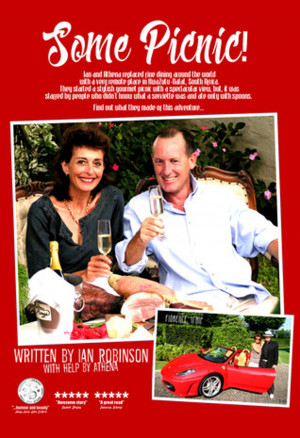 Some Picnic! by Ian Robinson
Price: $3.99 USD. Words: 99,960. Language: British English. Published: February 24, 2017. Categories: Nonfiction » Cooking, Food, Wine, Spirits » Gourmet
Ian and Athena traveled the world eating fine food and drinking exquisite wines: But, they chose to set up a gourmet picnic venue called Horizons, near Rosetta village (pop: less than 200), in the Midlands, KwaZulu-Natal, South Africa. To make matters more challenging, they were staffed by inexperienced local women, who didn't really know what a serviette was or how to eat with more than a spoon. 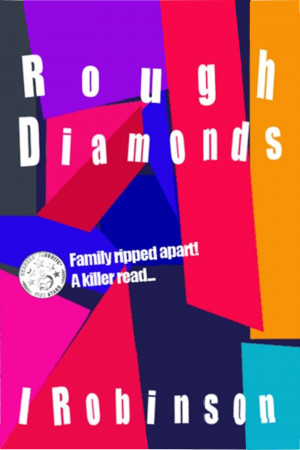 Family ripped apart! A killer read... In the sixties, we go to a mining village in South Africa. There is deceit, evil, malice, negligence, blackmail, rape, murder. The three children's Grandfather gives them three uncut diamonds. Also, he gives them each a bracelet with their names engraved on. The diamonds and the bracelets become their blessings and curses. This is not a read for the gutless...

You have subscribed to alerts for Ian Robinson.

You have been added to Ian Robinson's favorite list.

You can also sign-up to receive email notifications whenever Ian Robinson releases a new book.