Peter J. Harris, founder and Artistic Director of Inspiration House, is an African American cultural worker who has since the 1970s published his poetry, essays, and fiction in a wide range of national publications; worked as a publisher, journalist, editor and broadcaster; and been an educator, and workshop leader for adults and adolescents. Harris is also founding director of The Black Man of Happiness Project, a creative, intellectual and artistic exploration of Black men and joy. http://www.youtube.com/watch?v=ceyn8-PPQB4

In 2011, he was a Contributor-Collaborator with his daughter Adenike Harris on her Creative Thesis: Restorative Notions: Regaining My Voice, Regaining My Father: A Creative Womanist Approach to Healing from Sexual Abuse, Georgia State University. http://digitalarchive.gsu.edu/wsi_theses/23. He is co-writing the adaptation of the Creative Thesis, which is called Ghost on the Door: Healing Conversations & Loving Lessons for Survivors of Sexual Violence from a Courageous Daughter & Her Non-Abusive Father, a candid, ethical, loving dialogue between a Black father and a Black daughter confronting, surviving, and transcending her rape by a Black step father.

Harris co-edited Relive Everything & Live the Same: VoiceMusic from Avenue 50’s Black-Brown Dialogues Project, an anthology published by Avenue 50 Studio, Los Angeles (2011). He wrote the forward to New Wine and Black Men’s Feet by Keith Antar Mason (2010, Red Hen Press). His essay, “1,000 O’clock: Johnson Time,” was published in the 2009 anthology, The Black Body, edited by Meri Danquah (Seven Stories Press). Harris is author of The Johnson Chronicles: Truth & Tall Tales about My Penis and Safe Arms: 20 Love/Erotic Poems (and One Ooh Baby Baby Moan). His magazine, “Genetic Dancers: The Artistry Within African/American Fathers,” published during the 1980s, was the first magazine of its kind and asserted that African American fathers become artists through the frictions of conscientious parenting. His book Hand Me My Griot Clothes: The Autobiography of Junior Baby, featured a philosophical elder Black man ruminating on life, love, and ethics, and won the PEN Oakland award for multicultural literature in 1993. His personal essays about manhood and masculinity have been published in several anthologies, including Tenderheaded: A Comb-Bending Collection of Hair Stories and Black Men Speaking to name a couple. 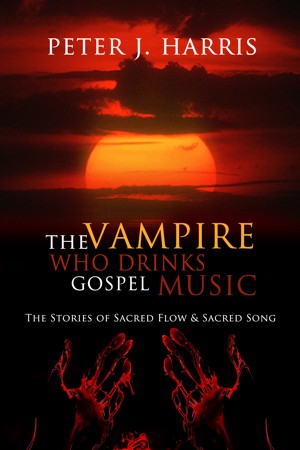 The Vampire Who Drinks Gospel Music: The Stories of Sacred Flow and Sacred Song by Peter J. Harris
Price: $7.99 USD. Words: 37,680. Language: English. Published: September 7, 2012. Categories: Fiction » African American fiction » General, Fiction » Thriller & suspense » Action & suspense
From darkened movie houses filled with enthusiastic narrators, to the Washington, D.C., campus of Howard University, to covens illuminated by masterful art and hidden in plain sight off the coast of Georgia and outside Ile Ife in West Africa, Sechaba, the Vampire Who Drinks Gospel Music, is haunted by the footsteps of his nemesis, the fearless anthropologist Candace Stallings.

You have subscribed to alerts for Peter J. Harris.

You have been added to Peter J. Harris's favorite list.

You can also sign-up to receive email notifications whenever Peter J. Harris releases a new book.