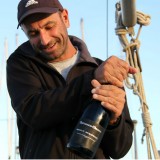 James Smith is a writer and film director, whose work spans a slate of feature film projects, autobiographical novels, and suspense thrillers.

Smith was born in Surrey, England and brought up in America and South Africa. His family returned to England in the 1970s, basing themselves in Essex, where he studied computer systems whilst immersing himself in the creative world of music, and in particular, guitar playing. A move to Leicester saw him graduate from De Montfort University prior to a ten-year stint working as a software engineer within the defence industry. In the early 1990s, Smith left the computer business to work for his parents' overseas property company and pursue his music, writing, and film-making interests.

In 2004, he formed Raya Films of London, and has since been involved in documentary production and the development of a slate of feature film projects including 'The Finca', an innovative suspense-thriller set in Andalucía. Smith's writing and photography has appeared in many publications including Mist, Geographical, and British Airways Medlife. With a background in film, much of his writing is visual, fast-paced, and laced with dry humour.

Smith is a frequent visitor to Spain, in particular, Andalucía, where he writes aboard Ipi ‘n Tombia, a modest ten-metre yacht (a ‘Bermuda Sloop’), which his father built in their backyard in Essex.

What is the greatest joy of writing for you?
Travel. My writing is based heavily on observation - colourful characters, places, events - and so I like to move around. I rarely sit at home agonising over a blank sheet of paper and I love the freedom and travel that being a writer enables.
What are you working on next?
I'm working on a thriller set in Andalucía. An Englishman gets caught up with some shady dealings involving dangerous factions of the international Mafia. I hope to publish it here soon!
Read more of this interview.

Where to find James Smith online

You have subscribed to alerts for James Smith.

You have been added to James Smith's favorite list.

You can also sign-up to receive email notifications whenever James Smith releases a new book.