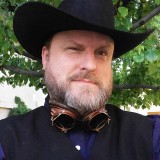 Jonathan Fesmire lives in sunny Southern California with his son. He loves writing, and is lucky enough to work as a copywriter for his day job.

His writes "The Mostly Steampunk Blog," located on his website, http://jonfesmire.com/. It covers, well, mostly steampunk, plus writing, art, and related subjects. It has many interviews with people prominent in the steampunk community.

Currently, he is writing his fourth novel, Bodacious Creed: a Steampunk Zombie Western , which started as a 3D modeling project but turned into much more. He expects to have it done, polished, and published by November 2016.

How do you approach cover design?
I like simple, artistic, and compelling covers. Before the Internet, it seems to me that the best covers for science fiction and fantasy were paintings showing several characters, perhaps a castle, and perhaps a beautiful outdoor scene. Not anymore.

Now, the first time a reader sees a cover, it usually as a thumbnail. The cover has to be something eye-catching at a small size. I've learned that images of people usually work best. The author's name and title should also be easy to read. A thumbnail that grabs the reader's attention will get more clicks, and if they like what they see on the main page, more sales.
What are your five favorite books, and why?
Give me an easy question, why don't you!

This is a tough one. To make it easier, I'm going to consider one particular series as one book.

My very favorite would have to be "The Dark Tower" by Stephen King, which encompasses eight books. It also includes many graphic novels and at least one novella about the main character. "The Dark Tower" is the story of Roland Deschain, a gunslinger from another world, where gunslingers are knights, and descendants of Arthur Eld, also known as King Arthur. As the last gunslinger, Roland's quest is to save the entire multiverse by protecting the linchpin of existence, which, in his world, manifests as a literal tower. In his adventures, he travels to different versions of Earth in different time periods, trains new gunslingers, and faces villains that have appeared in other Stephen King novels, including The Stand, Eye of the Dragon, and Insomnia.

Another, also by Stephen King, but so far as I can tell not directly related to "The Dark Tower," is "The Green Mile." It's one of the best woven stories I've every read. King wrote it in eight parts, released as a serial, and Afterword sections of the early books, claimed that how it would end was far from certain, even for him. However, it becomes clear that, even though he was releasing it as he was writing it, he knew very well what was going to happen. The first part, "The Two Dead Girls," covers the entire timespan of the novel and gives clues about what's to come, without giving anything away. It even misleads readers in some ways, though without lying. The characterization throughout the book is excellent, and the ending, while sad, resonates powerfully.

Next, "A Song of Ice and Fire" by George R.R. Martin, meaning all of the "Game of Thrones" books. People have pointed out how this reads like a history, and it does, but Martin brings us deep into the psyche of many major characters. When history gets personal, it becomes story, and this epic story is amazing. I like how there is magic in his world, but the world is also gritty and realistic. The magic grows as the story continues. This is sword & sorcery, but with serious rough edges

Have you heard of the bizarre genre? It fits within fantasy and science fiction, but is far crazier than any other speculative fiction out there. One of my favorite authors is Carlton Mellick III. His writing is straightforward. He doesn't go for fancy prose (and I do often like fancy prose), but the thing is, his stories are just so weird and compelling! For this top five books list, out of his work, I'm choosing "Zombies and Shit." Take a world that has suffered a zombie apocalypse, where the remnants of humanity live on zombie-free islands according to their level of wealth. Next, take reality television competitions, and imagine what would happen if the richest people watched a show in which the poorest people had to fight for their lives on a zombie-infested island. That's "Zombies and Shit," and it's brilliant.

The last book I'm going to share is non-fiction, and I love this book because it has turned around the way I market myself as a writer. "Your First 1000 Copies," by Tim Grahl, covers how to build a platform as a writer. The basics: share great content and build an email list of people who appreciate what you do. Of course, the book helps get you started.
Read more of this interview.

Where to find Jonathan Fesmire online 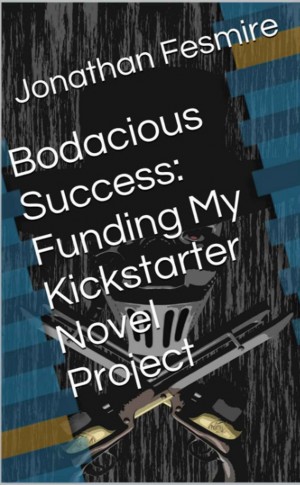 You have subscribed to alerts for Jonathan Fesmire.

You have been added to Jonathan Fesmire's favorite list.

You can also sign-up to receive email notifications whenever Jonathan Fesmire releases a new book.