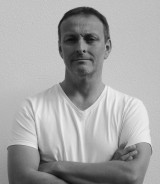 John Barlow’s prize-winning fiction and non-fiction has been published by HarperCollins/William Morrow, Farrar, Straus & Giroux, 4th Estate and various others in the UK, US, Australia, Russia, Italy, Germany, Spain and Poland.

His current project is the LS9 crime series. Set in the north of England, it follows the life of John Ray, the half-Spanish son of crime boss Antonio 'Tony' Ray. The series will eventually comprise nine novels.

John was born in West Yorkshire, England, in 1967. He worked as a musician before studying English Literature at Cambridge University and language acquisition at Hull University. After teaching English for several years, he moved to Spain to write full-time, and has been there ever since. He is married to Susana, with whom he has two sons. They currently live in the Galician city of A Coruña.

Apart from writing fiction, he also works as a ghost writer and journalist. He has written for the Washington Post, Slate.com, Penthouse, Departures Magazine and The Big Issue, and he is currently a feature writer for the award-winning food magazine Spain Gourmetour.

John’s first published work, a novella, won the Paris Review’s prestigious Discovery (Plimpton) Prize in 2002. He went on to publish a collection of novellas, EATING MAMMALS, the novel INTOXICATED, set in the late nineteenth century, and EVERYTHING BUT THE SQUEAL, a food-travelogue about Spain. He then published the off-beat noir novel WHAT EVER HAPPENED TO JERRY PICCO? under the pseudonym Joe Flores, before embarking on the LS9 series, which is scheduled to take him a decade to complete.

John has also worked with the conceptual artists goldin+enneby on their ACÉPHALE project, which has so far taken him to Nassau, Bergamo, Oslo and London, and into the company of Bahamian off-shore bankers, defamation layers, prize-winning artists, and Martina Navratilova. His writing for the project has been published variously in English, Italian, Spanish, Swedish and Portuguese, and has featured at numerous art shows/galleries in the UK, the US, Canada, Brazil, Spain, Sweden, Norway and Italy.The novel HEADLESS, based on the project, is scehduled for release in 1212.

Where to find John Barlow online

You have subscribed to alerts for John Barlow.

You have been added to John Barlow's favorite list.

You can also sign-up to receive email notifications whenever John Barlow releases a new book.