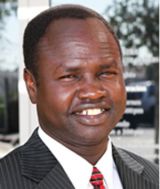 John Chuol Kuek earned a BA in Psychology, M.S in Counseling, and a Ph.D. Advanced Candidate in Psychology. John has become the first East African culturally appropriate therapist in San Diego County. He is currently working as a Marriage and Family Therapist Intern, pursuing his licensing process to become a licensed Marriage and Family Therapist. As the first East African Therapist, John has been providing therapy to families, individuals, children, couples … and more … with psychological issues from all walks of life.

John served on the Board of Directors of the Sudanese Community Association of San Diego as a General Secretary from 1999-2003. John also served on the board of the Southern Sudanese Community Center of San Diego from 2009-present. He was elected Chairman of the Board of Directors and is currently serving his term. In addition to serving at the leadership level of this community based organization, he is also serving as a church minister for the Sudanese Fellowship of the College Center Evangelical Covenant Church.

From 2000-2001 John started working as a Community Health Advocate with the New Americans Health Advocacy Program of Project Concern International’s California Initiative, which aims to bridge the cultural and linguistic gaps of accessing health care and education for East African immigrants and refugees in San Diego. John worked to bridge the cultural differences and language barriers, helping his community find and utilize health services, and provide basic health education and referrals. John’s interest in health, his outgoing personality and his enthusiasm were a tremendous asset to this program.

From 2001-2006 John worked as a project coordinator for Project ESSEA, the Ethiopian, Sudanese, Somalian, and Eritrean in Africa, a behavioral health project founded by Dr. Gebaynesh Galila Gashaw-Gant. The program aims to serve the needs of the East African population by providing a therapeutic approach which is flexible and culturally appropriate. In addition, there is a goal of providing educational materials and outreach efforts that de-emphasize the stigma associated with behavioral health problems and treatment. Through his work with this project, he became interested in changing his career from nursing to psychology. John’s passion has always been to service the needs of people in one way or another.

From 1998-2001 John worked as a certified nursing assistant (CNA) for Internext Home Care, which became Front Porch Home Care, a Retirement Communities facility in San Diego, California. John gained an interest in the health field as a result of his work with an International Non-Governmental Organization in Ethiopia’s Itang refugee camp, providing interpretation between Ethiopian doctors and the Sudanese patients.

Overall, his love for helping others in any capacity is a characteristic that differentiates him from others. His hard work and ability to cross boundaries to build capacity with others in the community is unsurpassed. His devoted service has gained him the respect and appreciation of his fellow workers and other professionals who have worked with him. John is committed to each individual within the larger community. His capacity to provide information and advice in the specialized field of human service lets him conduct business in a highly effective manner. 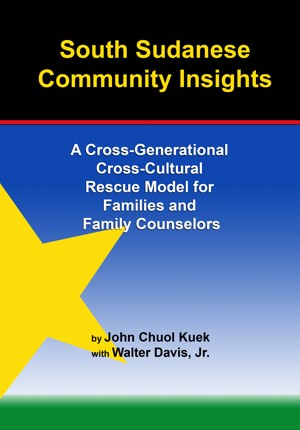 You have subscribed to alerts for John Chuol Kuek.

You have been added to John Chuol Kuek's favorite list.

You can also sign-up to receive email notifications whenever John Chuol Kuek releases a new book.