John Economides was born in Athens in 1962. He graduated from Athens College in 1981 and from the Law School of the Democritus University of Thrace in 1987. He is a lawyer practicing shipping and banking law.

A fervent exponent of progress, particularly economic and technological, Mr. Economides worked in the late ‘80s early ‘90s to modernize the Greek merchant fleet through the development of operational and technical quality standards. He promoted this through a club of young shipping professionals he launched, “The Newbuildings,” which argued that quality improvements would increase Greek shipping companies’ access to financial markets and improve economic performance. Despite reservations chiefly on regulatory grounds, this effort generally succeeded. A scheme for quality standards was adopted by IACS, the International Association of Classification Societies. Greek shipping companies embarked on extensive fleet renewal programs throughout the ‘90s and the ‘00s. Today the Greek fleet is one of the most modern and operationally advanced in the world.

In the late ‘90s early ‘00s John Economides joined an effort to modernize the Greek political, administrative and economic system. The modernization of the Greek system was powerful national and popular demand, which drew historically from the 18th Century Enlightenment/ Although it was carried forward by progressive forces during and after the Greek independence movement, it was still unmet at the end of the 20th century.

When the modernization process was revitalized by progressive political moderates like Costas Simitis and George Papandreou, John Economides began writing articles and blogs in support. Greece joined swiftly the EMU, successfully conducted the Olympic Games of 2004, and steered Cyprus into the EU and EMU. Greek GDP increased dramatically, and business thrived. Regrettably, however, the modernization effort was derailed by conservative forces of both right and left. The modernization of the Greek system was never consolidated. Despite the huge early benefits, Greece found itself essentially bankrupt in 2009.

Disappointed and disquieted in April 2005 John Economides began to write “The Importance of the Important,” with which he endeavoured to highlight the importance of organization in a state increasingly adrift in inefficiency and corruption. During the composition of this essay, however, he encountered various theoretical hurdles. The most important amongst them was how to explain that the significance of things and events depends on the effects they have and how those effects depend on relations between them. Relations develop from recurring interactions, interchanging actions and reactions. The process of specifying these relations and interactions led him to expand what was intended as a brief essay into a comprehensive philosophical and scientific treatise, “Theory of the Cosmos” in Greek (2010) and then “The Universe of Interactions in English (2012). These works endeavour to develop a comprehensive unified World theory based on evolution, arguing that humankind and the World can control their interactions and secure a brighter future by knowledge, technology, and basic economic principles.

Where to find John A. Economides online 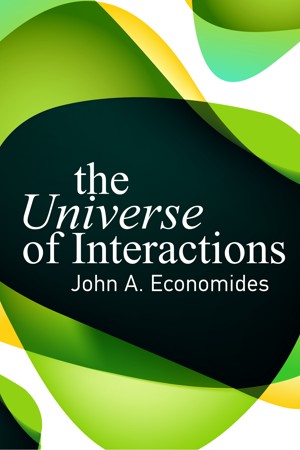 The Universe of Interactions by John A. Economides
Price: $9.90 USD. Words: 88,220. Language: English. Published: October 9, 2012. Categories: Nonfiction » Philosophy » Essays, Essay » Technology
“The Universe of Interactions” is a unique work, cutting across academic disciplines to achieve a truly global World View, with an optimistic conclusion about the course of human progress. Its ideas, integrating philosophy and science, offer both ethical and practical guidance for young students and policy makers alike.

You have subscribed to alerts for John A. Economides.

You have been added to John A. Economides's favorite list.

You can also sign-up to receive email notifications whenever John A. Economides releases a new book.