John L. Mariotti is an Internationally recognized executive, author and speaker. During his 48-year career, he led major businesses as President of Huffy Bicycles, and later as Group President of Rubbermaid Office Products Group, and later built a successful consulting practice. He was also Chairman of World Kitchen, Inc., on whose board he still serves. John has served on multiple corporate boards and consulted with and advised many well-known American companies.
He has written hundreds of articles, spoken to thousands, and authored 9 business books including The Power of Partnerships, and two award winners: The Shape-Shifters and more recently, The Complexity Crisis, which was chosen one of 2008’s Best Books.. He writes weekly blogs for American Express—Open Forum and for Forbes.com Prosper Now, plus his own newsletter, THE ENTERPRISE and blog, Telling It Like It is. John’s latest book was a novel involving a plant closing, international intrigue and cyber-terrorism, The Chinese Conspiracy, which was released in Jan. 2011. John will be releasing a new business book in mid-2012: THE INTERSECTION: Four Paths to Profitable Growth
John holds a B. S. M. E., from Bradley University and an M. S. M. E. from the University of Wisconsin. John lives in Central Ohio with his wife of 47 years, and they have 3 children and 5 grandchildren. John enjoys helping businesses and people become more successful. Like Dave, he too cares deeply about the USA and its future.

Dave M. Lukas is a modern day “Renaissance Man.” Recently turned 30, he is an accomplished speaker, entrepreneur and investor. He has been published in numerous publications, including Forbes alongside John Mariotti, and is known for his no-nonsense, common sense approach. He has been invited to work with thought leaders such as Brian Tracy, Tony Robbins Companies, Zig Ziglar, and many others. He also frequently speaks on the mindset of success and the everyday principles of strategic leadership and business growth.
He founded his first business at a very young age (5 years old!) and continued to develop successful businesses through college. Dave then took that early success to a national F500 company where he earned recognition as Rookie of the Year, Sales Consultant of the Year, and Top 25 Producer (out of 1500 sales reps). He is also an accomplished management executive and has developed numerous winning sales organizations.
Today, Dave consults with companies at all stages of growth, often taking ownership positions, which allows him to have maximum personal impact on strategic growth targets. As Vice President and co-owner of Grasp Technologies, for example, Dave has architected 100% growth every year for each of the last 5 years. Dave feels most at home when helping people learn new skills, or reach new levels of personal accomplishment. He holds a BA in Management and Finance from Baldwin Wallace College.

Where to find John Mariotti online 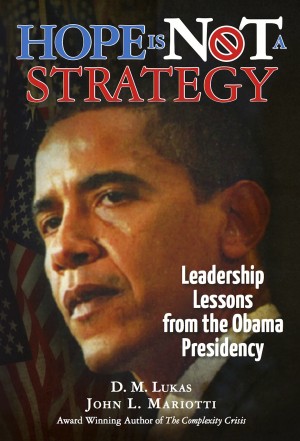 Hope Is Not A Strategy: Leadership Lessons from the Obama Presidency by John Mariotti
Price: $9.99 USD. Words: 39,530. Language: English. Published: March 15, 2012. Categories: Nonfiction » Politics & Current Affairs » White house, Nonfiction » Business & Economics » Management
This is a book on leadership, which uses the many mistakes and failures of Barack Obama’s first term as illustrative examples for leadership lessons to be learned. The mistakes and failures during Obama’s presidency are nearly all traceable to his fundamental leadership and experience shortcomings.

You have subscribed to Smashwords Alerts new release notifications for John Mariotti.

You have been added to John Mariotti's favorite list.

You can also sign-up to receive email notifications whenever John Mariotti releases a new book.