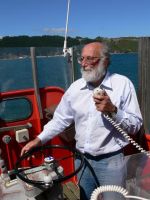 Dr John Robinson was born in Auckland, New Zealand in 1940. He has a BSc and masters degrees in mathematics (MSc) and physics (DipHons) from the University of Auckland and a doctorate (PhD) from MIT. He has lectured at several universities and worked as a research scientist – initially applying mathematics to physical problems, before moving to wide-ranging interdisciplinary studies for international organizations, combining information from global models with historical accounts and inappropriate cultural continuity at times of great stress.
While at Applied Mathematics Division of the DSIR in 1974 he began a career in futures research. Subsequent wide-ranging interdisciplinary work has included contract work for DSIR, OECD, UNESCO, UNEP, UNU, the New Zealand Commission for the Future and the USA Foundation for the Future as well as contacts with the Club of Rome. Despite the lack of official interest in an overview of global developments and the challenge to the growth model in New Zealand since 1984, John has continued his research. His analysis of long waves in capitalist economies (Excess capital, 1989) forecast the current depression and he has described the New Zealand situation during the coming global crisis on in NZ 2030, the world’s lifeboat (2009).
Since 1986 another part of his work has concerned Maori socio-economic issues. The considerable change of culture of Maori society when over three millennia of separate Polynesian culture ended with the coming of Europeans provided an example of the problems of a comprehensive culture change (or paradigm shift), as would be required if modern global society were to survive in a overpopulated and overstressed world. In each case a completely new situation arose. In each case the old culture persisted during a period of considerable disruption – now moving to a storm peak for global civilisation.
John has published scientific articles in international journals, written many reports on global issues, edited a couple of books and written several books:
Excess capital (1989, Technology Monitoring Associates, $25),
Rebuilding New Zealand (1994, Technology Monitoring Associates, $15),
Destroying New Zealand (1996, Technology Monitoring Associates, $15),
New Zealand 2030, the world’s lifeboat (2009, Island Bay World Service),
Cars at the end of an era, transport issues in the New Zealand greenhouse (2011, Friends of the Earth NZ, $20),
The corruption of New Zealand democracy, a Treaty industry overview (2011, Tross Publishing, $20)
When two peoples meet, the New Zealand experience (2012, Tross Publishing, $40), and
Twisting the Treaty, a racial grab for wealth and power (2013, co-author, Tross Publishing, $40).
Much of that research and experience has been made use of this book.
The first 3 are available from me. New Zealand 2030, the world’s lifeboat is out of print. Cars at the end of an era, transport issues in the New Zealand greenhouse is available from Friends of the Earth NZ at PO Box 5599, Wellesley Street, Auckland 1141. The last 3 are published by Tross Publishing, website www.trosspublishing.co.nz, email address trosspublishing@hotmail.co.nz.
Go well. It’s a beautiful world. 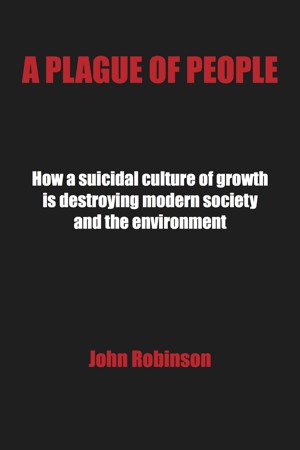 People fill every part of the planet, using all resources and driving other species to extinction, until further expansion is impossible. The process and consequences are fully explored here with a science-based forecast of a complete collapse by 2030. The culture change urgently required is refused by a kamikaze culture of growth controlled by a foolhardy powerful minority.

You have subscribed to alerts for John Robinson.

You have been added to John Robinson's favorite list.

You can also sign-up to receive email notifications whenever John Robinson releases a new book.