Jothy Rosenberg, north of 50 by a little bit, is an above knee amputee caused by osteosarcoma in 1973. Three years later the cancer metastasized and 2/5 of his lungs had to be removed. A course of chemotherapy -- only just out in clinical use in 1976 -- is probably why he is still here today. He went on to get a Duke PhD in computer science, be on the faculty of Duke University for five years, to author three technical books, to ride in the Pan-Masscahusetts Challenge bike-a-thon supporting the Dana-Farber cancer institute seven years, and to swim sixteen times from Alcatraz to San Francisco to support Boston Healthcare for the Homeless Program. In his entrepreneurial persona, Jothy has founded seven high tech companies where he has been Chief Executive Officer, Chief Operating Officer, Chief Technology Officer, or Vice President. In starting those companies, he raised more than $85 million in venture capital, with two of those companies providing a return of more than $100 million each. He could not have done all these startup companies if he had not developed the will power, determination, and focus that came from what happened to him, and if people had not kept saying, “I bet you can’t,” every place he turned. All told his athletic fundraising efforts to date have netted the charities over $100,000. Jothy has a wonderful wife, three kids, a grandson as well as a multitude of golden retrievers. He lives (and swims, and bikes) in Newton, Massachusetts. He wrote his book Who Says I Can't to try to share what he learned in over 35 years living as a cancer survivor, an amputee, as someone who has recovered from very intense life trauma, in the hope it accelerates that learning for those in a similar situation and perhaps motivates and inspires those just needing a little lift.

Jothy transfers a portion of the proceeds from this book to the O'Brien Osteosarcoma fund at the Dana-Farber Cancer Institute.

Where to find Jothy Rosenberg online 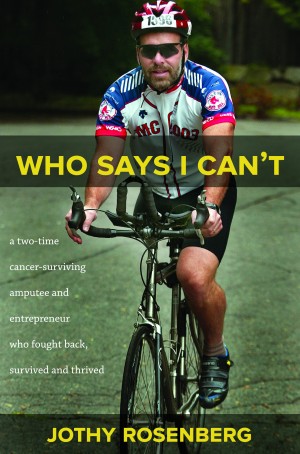 Who Says I Can't by Jothy Rosenberg
Price: $9.99 USD. Words: 88,760. Language: English. Published: April 1, 2010. Categories: Nonfiction » Inspiration » Personal inspiration
In Who Says I Can’t, Rosenberg teaches by example how everyone can overcome life’s obstacles. He shows that when the world says you can’t, courage and determination prove you can be more than “good considering.” You can be good . . . period. Not only that, you can use that positive attitude to inspire and stomp out stereotypes one leg at a time.

You have subscribed to Smashwords Alerts new release notifications for Jothy Rosenberg.

You have been added to Jothy Rosenberg's favorite list.

You can also sign-up to receive email notifications whenever Jothy Rosenberg releases a new book.